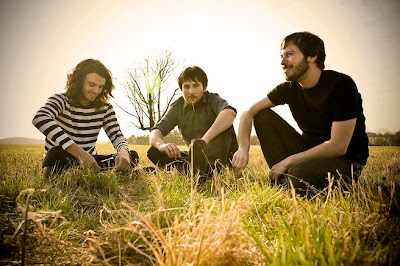 The second self-titled album by Pennsylvania indie-rock trio Good Old War is an album of immense growth. A natural evolution from the band’s debut, Only Way to Be Alone, Good Old War radiates with warmth and vulnerability, both qualities undoubtedly cultivated by the band’s hands-on self-production and the environment of solitude in which the album was created.

Legend has it, they holed up in a remote house in the Pocono Mountains through the white winter month of February 2009, using their time in complete isolation to explore new approaches to their music-making process.

Our Jam of the Day “My Own Sinking Ship” illustrates the process perfectly. It’s laden with intricate vocal harmonies, infectious sing-along melodies and lyrics expressing love and loss and living life thereafter.

The album urges listeners to be aware of their own mortality by spending their days doing what they love. Hopefully “My Own Sinking Ship” urges you to check it out – it dropped Monday.