On the morning of what many jilted lovers across the land view as the most superficial and contrived of all holidays, the music world brings us two substantial, significant, and genuine news gifts. 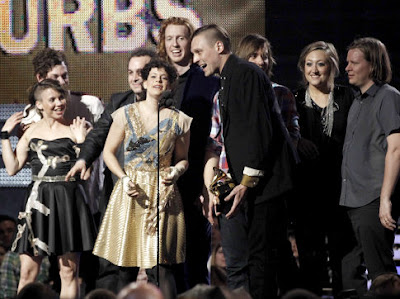 1) Last night at the 2011 Grammy Awards, a much deserving Arcade Fire rose up and nabbed the night’s top prize, Album of the Year for The Suburbs. While this recognition feels a bit like the Oscars’ Best Picture nod for Return of the King (after two preceding films that were generally regarded as “better”), the win for Arcade Fire is a shot across the bow of a recording industry that has recognized commercial viability over true artistry in recent years. Snatching the award from the likes of Lady Gaga, Eminem, and something called Lady Antebellum, the members of Arcade Fire, fresh off a hard rocking performance of “Month of May,” seemed as shocked as all of the pre-teens and industry types who had never heard of the inimitable Montreal-based rock collective until just minutes before. Check out their Grammy closing, post-win performance of “Ready to Start” (lamely cut off and interrupted by some corporate nonsense) below. 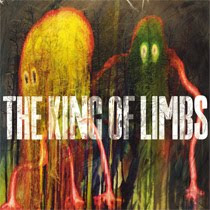 2) Radiohead has announced that the band’s new record, King of Limbs, will be released digitally this Saturday (actual physical release of the record will wait until May). We knew this release was coming sometime this year, but until last night, the release date was shrouded in mystery. With the digital download of the group’s previous record, In Rainbows, you were able to choose your price. No such luck this time for those of you wishing to grab another Radiohead album on the super-cheap. On Saturday, grab King of Limbs HERE for $9 or $14, depending on how you like your digital tunes (mp3 or WAV).

Both of these news tidbits make our hearts skip a beat over here at SIC. Happy Valentine’s Day.