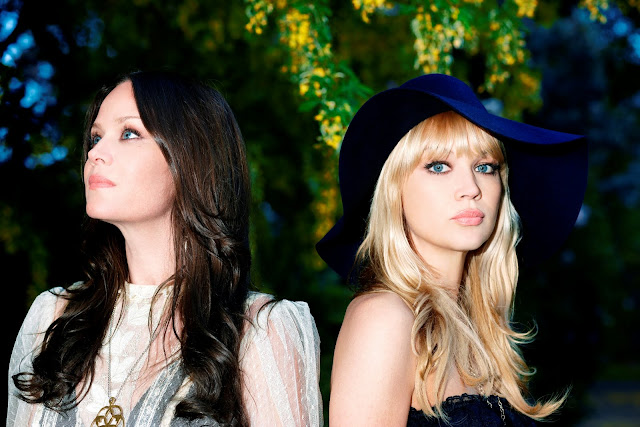 Siblings Catherine and Allison Pierce are from Alabama, but don’t let that fool you. You won’t find a hint of southern rock in The Pierces’ songs — their music is prettier, poppier, and catchier. They grew up listening to Simon & Garfunel and The Beatles, home-schooled and raised under the Southern sun by hippie parents, who taught them about music.

They live in London now, miles from their home, but at the heart of their creative peak. Their new album, You & I, was released earlier this week in the U.K. Here’s a quick taste of their single, “Glorious.”

They recently took part in our 10 to Spin series, handing over ten of their favorite songs about home.

Even though my sister, Catherine, and I love
traveling and touring, there are moments when our hearts long for home
and our loved ones. We have three new nephews that we haven’t seen in
months and will not see for many more. We would like to dedicate this
playlist to them and send them all our love.

Tell Me Why – Neil Young

One of my favorite Neil Young songs. I love to sing this with friends and lots of harmonies.

Paint the Moon – The Czars

I just recently heard this song for the first time and found it very moving.

Tears of Rage – The Band

There is deep yearning and pain in this song that I think we all can relate to.

What’s better than a good Bob Dylan song? One that Emmylou Harris sings on.

Jamaica Say You Will – Jackson Browne

Jackson helped form my musical identity. His melodies and insight into the human spirit are incredible.

Easy From Now On – Emmylou Harris [listen]
This one is about being hard on the outside, but soft on the inside.

Maybe the loneliest song I have ever heard.