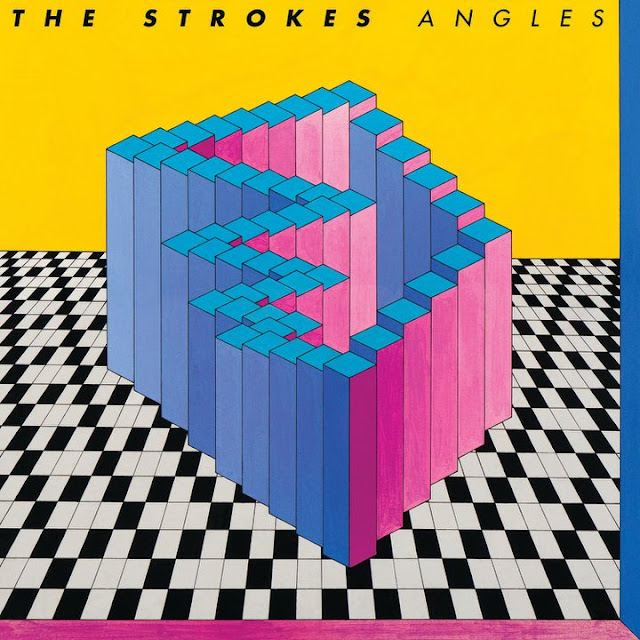 Back when The Strokes released “Under Cover of Darkness,” the lead single from their new LP Angles, we wrote about how excited we were about a return to form, a deportation from the overworked anthems and somewhat indulgent compositions of First Impressions of Earth, and about a reunion with the sonic buzz and the angular, riffy, garage sensibilities of their debut Is This It and the steady rocking follow-up, Room on Fire. Well, it looks like the New York City quintet got about half way home with Angles, which at times can be as confusing as the Q-Bert meets New York Times crossword album cover.

The sounds of Angles are all over the place. From the reggae bounce of opener “Machu Picchu,” to the wonderfully poppy skip of “Taken for a Fool,” and the dark drone of “You’re So Right,” the record’s continuity is somewhat lacking, but most of the tracks are, for lack of a better word… good. Angles‘ finer tracks include the aforementioned, “Under Cover of Darkness,” “Two Kinds of Happiness,” an homage to the ’80s that is braised in The Cars‘ musical broth, and “Grastisfaction,” a catchy jam that has been steeped for hours in Thin Lizzy’s tea.

While the record hits oh-so nicely with pop-oriented, ’80s tinged guitar grooves, Angles gets caught up with the cumbersome “You’re So Right” and the obligatory one “slow” tune per record, “Call Me Back.” We’re optimistic that Angles will bloom and blossom in The Strokes’ live performances, but that remains to be seen. We absolutely ache to hear “Taken For a Fool” live, to see Julian hunched over the mic stand, clutching it with one hand, to hear Nick Valensi’s needling solo, to feel the “lock it up” rhythm of Albert’s guitar, and to nod and bop to the surgical beats from Nikolai’s bass and Fab’s ever-impressive and reliable drumming acumen.

The Strokes – “Taken For a Fool”

Is This It was mind-blowingly brilliant in its hipness and provided the impression that this uber-high level of cool was innate to these New York twenty-somethings. Angles marks a turn back to that era, but the hallmarks of effort cast a pall on the record. Don’t get us wrong, the record is good… It is just not great. The Strokes set the bar very high for themselves with Is This It, and that has canonized them and cursed them at the same time. They will be forever held to the standard they set for themselves with what is arguably the best debut record of all time and certainly one that defined the garage rock revival. Angles is a very solid C+. Thus, the 79/100 rating. Good enough to pass, but nothing particularly spectacular or noteworthy. We truly believe that The Strokes have another A+ in them… Maybe they should stop trying so hard.