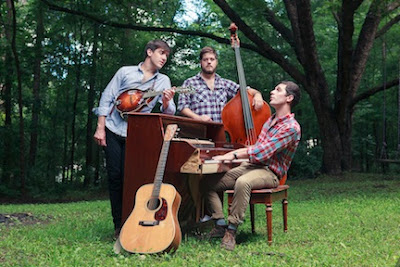 Chapel Hill’s Mipso have come a long way since I interviewed them a few years ago: dropped a word from their name (they were going by Mipso Trio then), added a full-time fiddler, probably even graduated from college (all three members were students at UNC at then). The strength of their songwriting has changed, too — it’s gotten warmer, and more intimate, and more refined.

“Louise”, the first single off the new full-length LP Dark Holler Pop, has the same strong bones of North Carolina roots pop, Avetts-influenced harmonies and banjos, that they were making on their first EP, but “Louise” is those roots all grown up and original to Mipso. It’s a deceptively simple story about love and luck in small towns, but the straightforward delivery and the ache of the fiddle in counterpoint to the vocals transport it to something unique, and something all its own.

In North Carolina, there’s plenty of good traditions to follow, and if you stay in those tracks, you’ll make good music; if you’re willing, like Mipso, to learn your lessons and then move a long way forward, you’ll make great music like “Louise”, quietly entrancing.