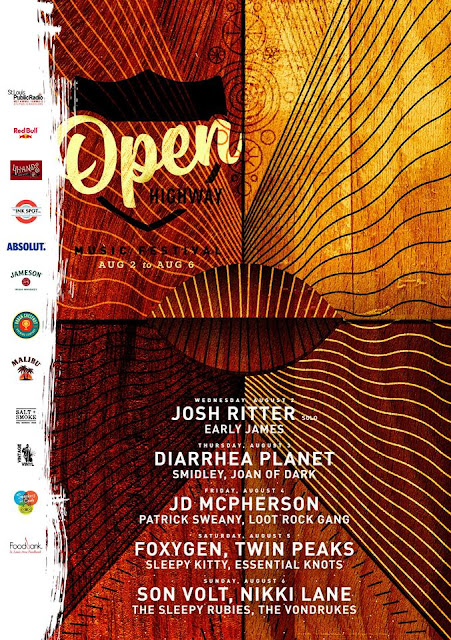 Open Highway Music Festival is back for its 6th year, running from Wednesday, August 2nd through Sunday, August 6th at Off Broadway in St. Louis. This year’s festival features three nights inside Off Broadway, and two nights outside the venue.

And it also features some big names.

Josh Ritter, who hasn’t performed inside Off Broadway since the infamous “raining from the ceiling” show in 2011, is kicking things off with a special, intimate solo show on Wednesday. Headliners for the rest of the festival include Diarrhea Planet, JD McPherson, Foxygen, Twin Peaks, Nikki Lane, and Son Volt, led by Jay Farrar.


Tell me more about this year’s lineup, why you booked who you did, etc.


Since the second year of the festival my main objective has been to expand and diversify the lineup in terms of genre. With us going outside for two days this year, I wanted to make sure we had two distinct days of music that wouldn’t necessarily have a lot style overlap. We were able to get Foxygen and Twin Peaks to sign on pretty early in the process and we were really happy with that. Combining Nikki Lane and Son Volt for [the final headlining day featuring Son Volt] made sense and we were really happy with how that came together. The indoor shows came together very naturally and adding Josh Ritter was the icing on the cake. One of the things I’ve done each year is to bring in an artist to play indoors, who on paper, is too big to play indoors. Josh Ritter is an example of that and we were thrilled to make that work.

This year, you’re moving the festival outside for two days. (Last year was the first year you had a stage outside, but for only one day.) How does having a stage outside make a difference in what you’re trying to do with OHMF?


Going outside last year was a real learning experience and we were overall very happy with how it went. By going outside 2 nights this year were interested in expanding the event both in size and scope, plus a lot of the steps taken to go outside for one day made two days outdoors seem to make sense as well. I feel that by being outside for two days lends itself to being more of an event. We are excited to see what happens.


What are the options for buying tickets?


There are several options and they are all available at offbroadwaystl.com. Tickets can be purchased for individual shows, just like how it would be if you were attending a show at Off Broadway. We have a weekend only shows package for $30 which is a great deal we think.

Open Highway Music Fest is now in its 6th year. What are some of your best memories from the previous 5 years of OHMF?

Overall, I have been thrilled to see OHMF grow each year, And we have seen consistent growth each year. A few things stick out, seeing Norah Jones on stage was pretty great. And I drove her to get vitamins and she was incredibly down to earth and nice. She played with Cory Chisel and he’s my favorite singer ever and every time he is here it is my favorite show. Ryan Bingham was amazing and a true gentleman. Jesse Irwin delivered one of the funniest and entertaining sets I’ve ever seen a few years back. Marty Stuart and the Fabulous Superlatives had an incredible set last year, the type of set where I wondered if there was a better band on the planet. Seeing Pokey on the big outdoor stage was great, everything came together for outdoor show.