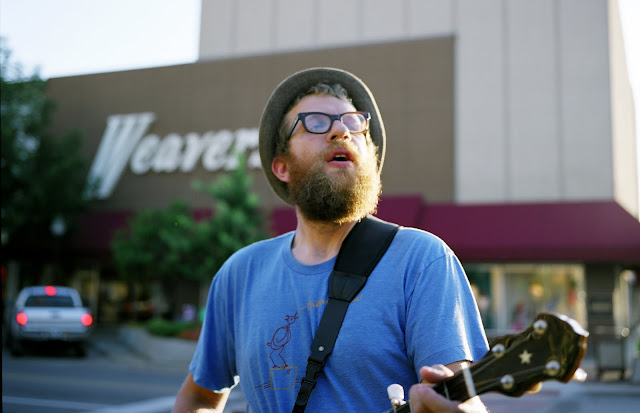 We’ve heard when Phil Cook isn’t touring the world with his genre-blending folk band Megafaun, he’s on the porch of his North Carolina home, finger-picking his guitar, while his loyal dog Willie lays nearby. So it only makes sense that these intimate moments would eventually be recorded and make their way to a proper release.

Hungry Mother Blues was captured in a single day, in the back room of Cook’s house, during a rare North Carolina ice storm. The immediacy and intensity of the performances have little to hide behind, as every song incorporates a single instrument in all of its vulnerable glory, with the occasional addition of Cook’s tapping foot.

To help us celebrate the album’s release May 10th, Phil once again takes us home, trading his porch and guitar for his turntable indoors –  laying out one hell of a soul-filled springtime playlist. So open those windows people, and give your neighbors a taste of his 10 to Spin.

At the end of the film Adventures In Babysitting, starring Elizabeth Shue, there is a scene where Chris, the babysitter (Shue), is in a race against time to return everything to normal order after a crazy misadventure in Chicago’s underbelly before unsuspecting parents arrive back home from a dinner party. It’s a solid soundtrack all around, Chicago-centric, but this tune just nailed it for me. I was 11 years old and I’d rewind the scene over and over and dance around the living room. 25 Miles would go on to accompany me home from Hillcrest Elementary school, bounding ten blocks home through the snow and cutting through the same backyards day after day. Years later, this song would be responsible for at least one speeding ticket as well as a few noise complaints in college. The drumming is simply phenomenal. Rambunctious and relentless and fanning the flames on Edwin’s searing vocal take.

I’ve played The Troubador in Los Angeles and it’s not a big place, even though everyone you’ve heard of has played there. I will always have an affinity to smaller rooms because a few hundred people packed together in close proximity is always more exciting than a few hundred people with their personal space in bigger room. This is my ultimate wish-I-could’ve-been-there show. There are these two women in the crowd that just CAN NOT contain themselves at Donny’s singing and they’re presence is my wife’s favorite part of the recording. My favorite part of the recording is every single perfect bass line delivered by Willie Weeks. Virtuosity can be misread when the only filter in one’s criteria is simply “lots of notes real fast.” (See 2/3rds of all bluegrass, metal, jazz or any other music based in “virtuosity”) Virtuosity must imply a deep understanding. A deeper listening only exemplified by patience. How they pick their moments and choose to fill that space. How they help you hear that space. Fantastic.

These amazing women are responsible for the backing vocals on Aretha Franklin’s greatest songs. They made a few albums on their own and this title track from their S/T record is wonderful. Trivia note: Cissy Houston, the mother of Whitney, is a founding member.

“Blue Monday People” by Curtis Mayfield [listen]
My buddy just showed me this record (There’s No Place Like America Today) It’s the newest addition to my weekly spins. Curtis singing all close and falsetto around your ears. Soooo good. I can honestly say that there’s no way D’Angelo wasn’t familiar record when he made Voodoo ten years ago.

Allen Toussaint is a straight up bad ass. Through and through. Not only is he the mastermind producer behind two out of three songs to come out of the city of New Orleans for the last fifty years, but his well sought-after solo LP’s are the complete package. Thoughtful existentialist lyrics, swampy grooves, perfect hooks, and creative arrangements. This is the first of two songs I’m including in this list. I almost made this whole list an Allen Toussaint listening guide. Another time, another hour.

Check that roomy slide hook. Also, is that drummer just slapping a cardboard box with a canoe paddle? I hope so dammit. This my favorite track to come on the house sound systems when we leave a stage. You should all see our collective air guitar for this poignant guitar solo.


“Voodoo” by the Neville Brothers

The record Yellow Moon was a staple of my childhood. My father, always a champion of Aaron Neville’s vocal prowess, would include this song as well as the title track on his yearly Ski-Tape. Back in the day my dad would take off a whole day of work to execute the perfect mixtape, which he had been mulling over for weeks. This tape had an important function. It would be the only source of music we’d hear for the entirety of our annual downhill skiing trip to the Upper Peninsula of Michigan. The entire five hour drive there and back the Ski-Tape just flipped its sides and rolled on. My father, an active lifelong skier, raised Brad and I on the slopes. The long chairlift rides were the perfect no-escape situations for him to talk to his growing sons about things like sex and college. To this day, I’ve never seen anyone who can ski like him. His Ski-Tape rolling on inside his headphones, he had perfect balance on all four of his edges and he used the whole hill, taking his time and exploring every corner of the run with a patience and a grace no one had. Brad and I, looking only for jumps, would barrel down each run at break-neck speed focusing solely on the lip of a dropoff slope where we’d try and perfect our “Daffy”, but with one chance each run, we had to get in as many runs as we could. We’d meet up with dad every six or seven loops in the chairlift line but usually as we waited in line for our chair I’d look up the hill and spot dad up there, taking his time. Feeling the land. The subtlety in his effortless turns matching every nuance of Aaron Neville’s floating voice in his ears.

“Get Right Church and Let’s Go Home” by The Staple Singers [listen]
The Staple Singers are my favorite singing group of all time. They take me to the place I want to go. Every time. Mavis was so young when they started recording, maybe 13 years old. Their early years were their most potent. Touring the country’s churches and civil rights marches, they were often backed only by Pops’ classic tremolo-bathed electric guitar and occasionally a drummer. This song is only a minute and a half long, but I’ve filled at least a week’s worth of my life with that perfect minute and a half.

“Everything I Do Gonna Be Funky” by Allen Toussaint [listen]
Off of the record From A Whisper To A Scream this groove may be too much for some people to handle. This groove will do things to your pelvis that you may not be prepared for nor comfortable with. That kick drum pattern has space to play a soccer game in. Unreal. Also, check out his use of acoustic guitars and lap steels in this setting. Rare instruments in funk music, but so natural here.

“You Can’t Stop A Tattler, Part II” by Washington Phillips [listen]
Between 1927 and 1929, a traveling preacher named Washington Phillips made eighteen recordings and was never heard from again. This happened a lot in the late twenties, as shellac was plentiful before the war and the first boom of the record business was underway. We don’t know much. We have only the small offering of these recordings and the oral anecdotes of a few distant relatives and acquaintances years later. There’s a celestial quality, similar to a calliope, that’s in his instruments and his playing that transports me to another time and place when regionalism hadn’t yet met with the persistent unification of mass communication networks. The blurry picture of Washington’s life and story makes for great debate, just google him. Academic papers and assertions galore. I’ve read some of them, but it doesn’t matter in the end. I prefer to exist in that “unknown” this time. Enjoy.