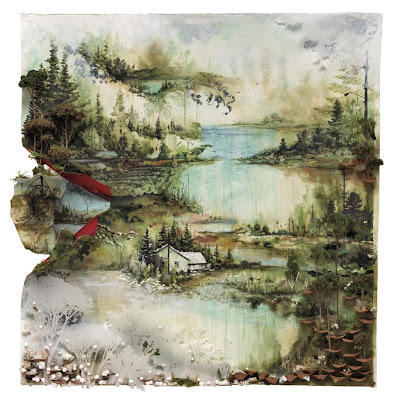 “And at once I knew I was not magnificent.” This lyric comes from “Holocene,” the third track on Bon Iver’s self titled second LP (Jagjaguwar), and it may just be the musical moment of the year…

Bon Iver, the musical undertaking created and marshaled by Justin Vernon, will likely be forever linked to the near mythical story of the 2007 debut LP For Emma, Forever Ago (a love-sick Justin gets mono, moves to a cabin in Wisconsin, sleeps a bunch, and makes an astoundingly captivating, sad, sparse record, all by himself). Since then, Bon Iver released the Blood Bank EP (containing even more mesmeric, stripped-down tracks that would have been right at home on For Emma). Mr. Vernon also guest starred on Kayne West‘s latest LP and formed a jazzy, smoldering side project called GAYNGS that embarked on a tour, captivating audiences with their groovy style and resonant jams.

Since 2007, and following the EP and the emergence of GAYNGS, the music world has wondered what would come next from Bon Iver. Would new songs be cut from the same cloth as the For Emma tunes? How could Bon Iver build on the distinguished debut effort? Would Justin take the project in an entirely new direction? All questions, hopes, anticipations, and expectations were answered when Bon Iver was released last week. Simply put, the record is… magnificent.

Bon Iver is not as melancholy as For Emma, but it is still introspective. There is hopefulness (a touch, not a ton) in this record that doesn’t seem to be there, or at least as present, in the debut. The production is anything but limited. Layered, escalating compositions with horns and pounding percussion support Justin’s characteristic voice and thoughtful, but sometimes recondite, lyrics. If For Emma, a lonesome, singular recording, was Justin’s record, Bon Iver is an album that showcases the scope of the project and the artistry of the band as a whole.

The record begins with “Perth,” a perfect jump off for the dynamic new record. The opener starts with gentle electric guitar melody that leads into an echoed choral howl. A rolling, Revolutionary War-esque snare drum appears and Justin opens with the record’s first verse: “Iʼm tearing up, acrost your face, move dust through the light, to fide your name, it’s something fane, this is not a place, not yet awake, I’m raised of make.” (Find all of the record’s lyrics, weird spellings / fictitious words and all, provided by Jagjaguwar, here). The track then coalesces into a booming, rhythmic, arrangement unlike anything we’ve heard before from Bon Iver.

As the gentle start to “Holocene” plucks its way into your ears, it moves swiftly to the brain and washes over the heart, like reflective beauty distilled into drug form. As Justin sings “Someway, baby, it’s part of me, apart from me,” one knows immediately that this is a special, utterly personal track. The track meanders slowly through the rest of the first lyrical stanza to reach… the moment… “And at once I knew I was not magnificent.” After this individual, intimate, gut-wrenchingly honest self-indictment, where the arrangement pauses to honor the gravity of this realization, Justin is buoyed and elevated by his band-mates as subtle, swirling horns, rolling drums, and background bells/keys build the most astounding track of the record, if not Bon Iver’s career.

After moseying through additional highlights like the stripped down, slide guitar accented “Michicant” and Bon Iver‘s first single, the dreamy “Calgary,” the record ends with “Beth / Rest,” a stunning pajammy jam of a closer where elements of the GAYNGS aural aesthetic are clearly present. “Beth / Rest” could easily be played as a slow dance at the Last Prom on Earth. A winding, ’80s style ballad, accented with horns, slide guitar, and a noodling electric guitar lead, the track lets the awestruck listener down easily. It is as if Justin and Co. are putting us to bed with a wistful lullaby after an hour of satisfying sonic gratification.

With back to back LPs that showcase undeniable skill in songwriting, composition, and execution, (and a solid EP and side project in between), Justin Vernon and his project Bon Iver have embedded themselves in the pleasure centers of the minds of listeners, fans, and critics alike. It all started years ago, with Justin alone in that cabin. With each spin of Bon Iver, the story of For Emma slowly fades from the listener’s mind and solidifies the fact that when it is all said and done, Bon Iver’s true legend will be the music and not the story of the project’s well-documented inception.