The reverence surrounding Jeff Mangum is daunting. His once cult following has become more akin to a legitimate religious cult, whose zealotry has only grown more fevered with age. This fanatical devotion is evident even before actually seeing him in concert because acquiring a ticket to any show on his recent tours is a feat in and of itself. Tickets to this show at The Grey Eagle in Asheville, North Carolina were sold out within an hour of their availability, and when I saw him for the first time in Chapel Hill last year, all the tickets were gone in just over a half an hour.

Despite all the fervor, it was clear that the Neutral Milk Hotel frontman does not consider himself to be any sort of messianic poet, and he appeared very uncomfortable with his exalted status. There has been no photography allowed at any of the shows on the recent tours, and it was clear by his expressions to those bold enough to try and snap a picture (myself included) that this was for his mental health, rather than to keep his stage show from winding up on Youtube. He appeared very awkward on stage, often sighing mournfully at the end of songs and rarely speaking to the crowd, which is not a criticism, but simply a suggestion that being in the spotlight again after all these years might be wearing on his nerves. Another area of note was his appearance, which has changed dramatically since my last encounter with him. A cleanly shaven and bright eye’d Mangum took the stage in Chapel Hill last January, but this time around he was sporting a large, greying beard, and a bedraggled countenance that made him difficult to recognize upon first taking the stage.

Unfortunately incessant crowd chatter rendered opener Tall Firs nearly inaudible, but the band took the crowd’s disinterest in stride. Those that did pay attention were treated to a solid set of chill, guitar-driven indie ballads.

Then Mangum took the stage. 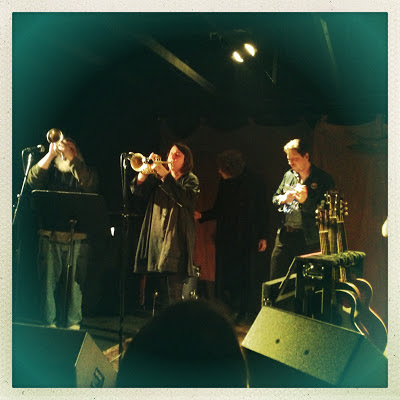 The audience went wild as he opened the set with “Holland, 1945,” which had nearly the entire crowd already singing their hearts out. Audience singing was constant throughout the night, but it wasn’t of the obnoxious, “Shut the hell up” variety, it was a unifying, joyous thing that felt fantastic to be a part of. As Mangum sped through highlights from Neutral Milk Hotel’s seminal albums, the energy in the room was electric. It wasn’t high-voltage rock show energy, but more of a devotional adulation that was both comforting and breathtaking. The most beautiful moments of crowd participation came during sections of songs where Mangum would encourage the crowd to take over entirely, such as the iconic “I love you, Jesus Christ” intro of “King Of Carrot Flowers Pts. Two & Three,” and the instrumental break in “Ghost.” The majority of the set was comprised of Mangum playing solo with an arsenal of acoustic guitars, but he was accompanied by horns on “Oh Comely” and “April 8th.” Set closer “The Fool” was one of the many highlights of the night, and featured members of Tall Firs and some of Mangum’s “dear friends” playing floor tom, flugelhorn, trumpet and tambourine. The excitement on the player’s faces during this song was great to see, and Mangum was clearly more comfortable on stage when joined by his friends. A few minutes after exiting the stage, Mangum returned for a coda of Neutral Milk Hotel’s beloved “In The Aeroplane Over The Sea,” which was met with the most forceful audience accompaniment of the night. I’d be shocked if there was a single person in that crowd that wasn’t at least humming to themselves.

Some would say that with all the hype about Jeff Mangum’s return, seeing him live could never live up to expectation. Sure, to someone who isn’t that into Neutral Milk Hotel’s music the show might seem less interesting, but Jeff’s performance isn’t the only thing that makes his concerts so powerful. It’s the people. When that many people who love Jeff’s music so much and have waited over a decade to hear it live, are put into a room together the energy is indescribable. It’s a truly unique experience, and one that I hope anyone with an appreciation for Jeff’s music, classic indie rock, sing-alongs or the flugelhorn can have.