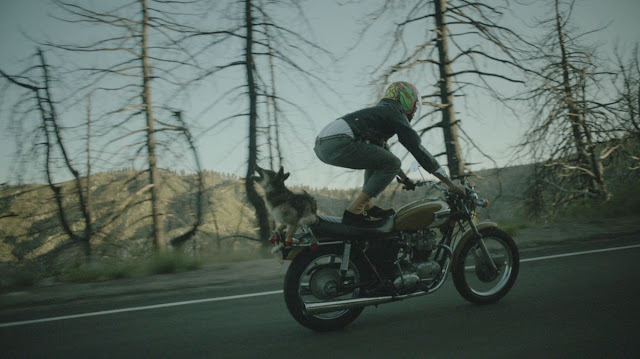 For those of you who’ve never had the pleasure of spending an extended amount of time in Asheville, NC – lemme set the scene for you. Imagine every person that fits a musical image you’ve ever known, congregated in one place. We’re talking every pot one could be categorized in – hippie chicks, alt-country washtub players, neo-African dancers, blues guitarists, sidewalk comedians and a plethora of hipsters. Pick up those people, and deposit them in a city that is roughly four blocks by four blocks at its center. Place that city in quite possibly the most beautiful mountainous area on earth – and you have Asheville, North Carolina.

The Orange Peel is a beautiful venue that once housed a roller skate park back in the 50’s. So it’s large, and open – the perfect place for a Friday night dance party to be thrown down. Enter George Lewis Jr. and a very large fog machine. Exit inhibitions, and the upper 50% of your clothing.

As an avid consumer of live music over my 34 years on this earth, it’s rare when a highly-anticipated show shapes up to be exactly what you wanted it to be. It was my birthday, and I had just finished a delicious meal after drinking insanely-good local beers all afternoon. I stood there, surrounded by everyone from dolled-up girls who looked they were going to “da club,” to a nerdy couple who wouldn’t stop making out (you know who you are…tsk.) After a long wait, Twin Shadow came out, and launched into, IMO, the three best songs they’ve recorded. This shit was on.

I didn’t keep notes, hell I didn’t plan on making this a post at all, but after the polarizing debate on his new album, “Confess” – I feel the need to put my feelings down in e-ink. Simply put – Twin Shadow not only put out one of the top three albums of the year, but they also put on one of the best sounding, and most entertaining shows, I’ve seen in a long, long time.

Even with technical glitches like Lewis’ keyboard-thingy falling off mid-song a few times – everything was on-point. They turned said glitches into opportunities to try new things and use a guitar, for example, in place of keys, rather than struggling to get things back up and running.

And so went the show. Song after song, that shit sounded amazing. Pauses were minimal, and besides saying hello, and telling everyone he grew up in NC for a while, and believes it’s the most beautiful state in the nation, Lewis kept it all business. He danced, mixing the setlist between old and new masterfully, bringing us to the encore, where things got even more interesting.

Coming back on stage, Lewis addressed the crowd by saying, “raise up North Carolina…let’s do this the way I’ve been told you do it,” while making the unmistakable motion that Petey Pablo made famous a decade earlier – the shirt helicopter. Men, women, masculine-looking women and effeminate-looking men all disrobed from the waist up, and helicoptered that shit like crazy to the final jam of the night. Lewis himself took off his Twin Shadow Starter jacket, exposing what I can only describe as a mesh poncho, and let that shit ride.

It was the perfect, weird end, to an awesome show, in a weird city.