The grids, they are what lure you in. You see them the day they’re released and that’s when you think you stand a chance to have it all — they look so clean, so structured, so inviting. You block out the crowds, the lines, the sun, the hunger, and the thirst from your mind. You’re going to make it from this stage to that stage, find the best place to stand or sit, and it’s going to be perfect. You’re not going to miss a single moment of the Lollapalooza of your dreams.

But then, when you enter the gates, and the clock starts ticking, things move faster than they seem. You’re already late, you start focusing more on what you just missed than what you’re about to see. By the time late afternoon hits, you look at those grids and you immediately realize all of those blocks of time that are now in the past. It’s a little overwhelming — how could all of that have happened already? And where were you? Eating a taco? Drinking a Bud Light? Standing somewhere near the Google Play tent trying to decode the festival map? Texting? Standing in a line?

It’s okay. Because your music festival experience is yours, and will be like no one else’s.

Sure, you can say, “I went to Lollapalooza in 2012.” But that doesn’t really mean anything to anyone else but you. What you saw is not what your friend saw. And it’s certainly not what those people at Perry’s stage did in the mud. And really, it’s okay.

Festivals like Lollapalooza will cause you to change your mind hundreds of times, right up until that moment when you’re singing along to Florence + the Machine’s “Shake It Out.” In that moment you finally realize that all that matters is now, that the moment you’re in is the most powerful memory you’ll have when it’s all over, not that other band that could have also been killing it somewhere else in Grant Park. 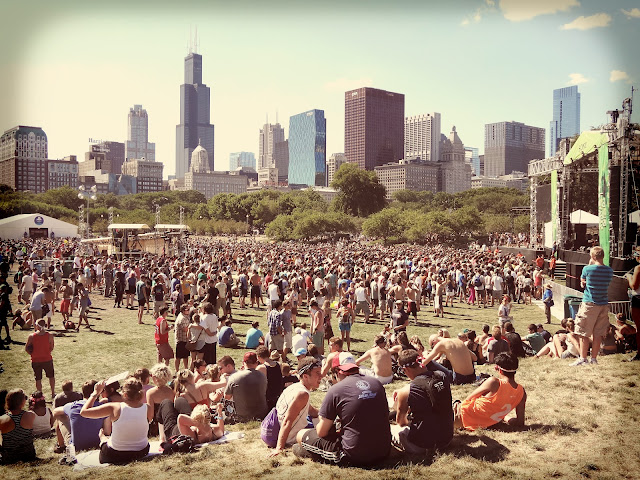 Of course, I do end up getting to Grant Park later than I wanted, but not tardy enough to miss Sharon Van Etten, who, despite not having a repertoire of happy, “festival” material, does just fine with the songs she does have. Her set is filled with selections from her wonderful 2012 album, Tramp, and her vocals are crisp. That’s a good thing, since her songs focus on words that bite.

I leave Van Etten’s set to catch Blind Pilot, which turns out to be a mistake, only because the sound on their stage is absolutely horrible. Israel Nebeker’s voice is barely heard through whatever filter of technology that is holding it back. It’s unfortunate, to say the least, but when “Keep You Right” sounds entirely muddled, I know it’s time to move on.

Moving quickly now, Emily Haines is waiting for me at the Bud Light, and her band from Toronto, Metric, provides the first wonderful moment of my Lollpalooza experience. They open with the first three tracks from their 2012 album, Synthetica, “Artificial Nocturne,” “Youth Without Youth,” and “Speed the Collapse.” Haines is clearly amped, bouncing around the stage, showing that she’s a born leader. “Breathing Underwater” sounds absolutely fabulous under the sun.

I keep moving. This time to the other end of Grant Park for a few minutes of The Afghan Whigs, who are playing to a healthy, vibrant crowd on the south end. Their reformation provides Lollapalooza with a natural, steady diet of rock. It’s needed, and I could have used more of it throughout the three-day festival. I’ll see them again if I’m ever given the chance.

Next is The Head and the Heart, who we’ve written plenty about on Speakers in Code. They open with the same two songs as they did at The Pageant not too long ago, so I don’t stay long. Their crowd is massive, and I’m sure if they played “River and Roads,” which is a certainty in my mind, thousands of people screamed when
Charity Rose Thielen let loose. I’m a bit sad to have missed it, but I want a good spot for what was next.

And that was Passion Pit. By now you know that lead singer Michael Angelakos is battling some personal issues, which aren’t even personal anymore. But watching him appear before thousands upon thousands of people who were ready to cheer his every move, you would have thought all was normal in his world. His entrance was chilling, and he led his band into “Take a Walk,” which had arms waving and voices screaming. By the time “Sleepyhead” was played near the end of their set, Angelakos had quelled any doubts about his ability to perform — his band swung for the fences and delivered a bomb that ricocheted off the shores of Lake Michigan.

I made a quick decision to catch a few minutes of Dawes, but honestly, I still don’t get them. Taylor Goldsmith’s voice is fine, but there is something about their bland lyrics that just leave me wanting more. And their sound just doesn’t go anywhere at all, at least for me.

So, I wait. For Ozzy Osbourne and Black Sabbath. But, again, the magic is lost on me. Maybe I’m just tired. Or maybe I’m just still thinking about Metric and Passion Pit. 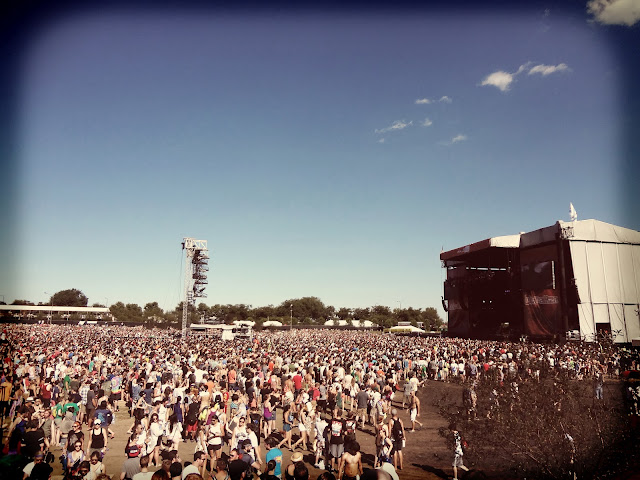 I had every intention of catching Milo Greene, but it just wasn’t meant to be. My 80-minute commute got the best of me, and I began my day with JEFF the Brotherhood, which is like slamming tequila for breakfast. And lunch. I see the appeal here, and it does something for me: it’s two dudes who obviously love what they’re doing, and they get right into it, smoke machine and all. No complaints here, other than it’s blazing hot, and I’m standing on concrete.

Delta Spirit keeps things in high gear, ripping into songs from their recent self-titled album. “Empty House” sounds like it was made for a festival, and lead singer Matthew Vasquez looks like a guy who would drink you under the table and then steal all your cash (to go get more beer, of course). My favorite song of theirs, “Bushwick Blues,” doesn’t disappoint.

I leave before they’re done to catch the tail end of GIVERS, who close with “Up Up Up,” and it’s a party. The band from Louisiana should be a staple at any festival, as their sound bounces and rocks perfectly outside, no matter the temperature that it’s met with.

And yes, the temperature. It was about to drop. We evacuate the park because of an impending storm, which promised lighting and high winds. It was the right call, but that means no Alabama Shakes, which is a shame, but also a reality.

It also means no Tallest Man On Earth, only because I had no idea he was still playing. No regrets here, though, as Fun. were a major surprise, ending their set with their two biggest hits, “We Are Young” and “Some Nights.” I honestly still think their music is ridiculous in a bad way, but after the storm that came through, perhaps it was the perfect medicine. Okay, Fun. You had me believing for a few songs.

I hop on over to the Bud Light stage for Franz Ferdinand, who are entertaining, and sound a little like Phoenix, only not nearly as good. This is all my opinion, of course, and they do a fine job keeping people happy, which is all you can really ask for, especially when a festival re-opens after a three-hour postponement.

Somehow, I muster enough energy for Red Hot Chili Peppers, but not enough to last their entire set. They still have it, and Flea is still a bad ass. But, my legs and feet hurt. I must retire for the night. 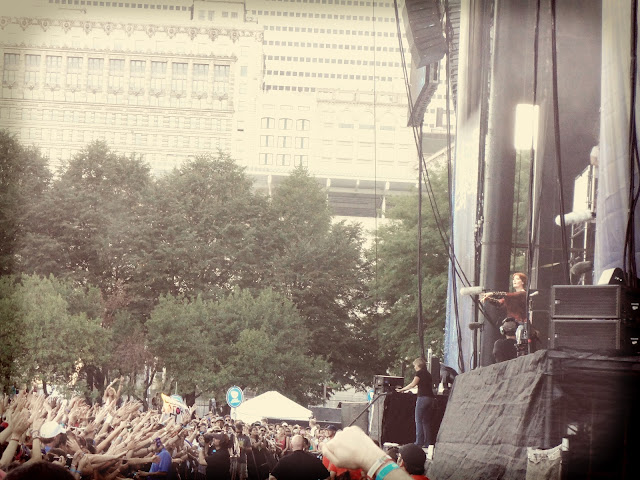 I get my first glimpse of Perry’s Stage for a bit of Nadastrom. Perhaps I would have stayed if I were 20. Sadly, I’m almost 33. And I don’t slide through mud. And hearing aids are expensive.

Besides, I want to see Gary Clark Jr. for the fourth time. He rips through “Don’t Owe You a Thang,” but sadly, there are sound issues, and you can’t really hear him sing. You could make a strong argument that he doesn’t even need to sing, given the way he can play, but still. Gary, you deserved better. At least the crowd was huge.

I don’t have much of a plan at this point, so I walk over to catch Sigur Ros, which wasn’t the best idea. I know they’re loved by many, but it’s all sort of boring to me. And I’m not easily bored. Although, I did once fall asleep to Jay-Z at Bonnaroo. So, there’s that.

Finally, a highlight: Of Monsters and Men are as buzz-worthy as you’ve heard. I’m not sure how describe their music, but you could dance to it if you were so inclined. And really, they don’t let up. They keep coming at you with catchy, smart music that will find your ears in the very near future if it hasn’t already.

I feel the need to see Florence + the Machine, so I make my way through her (mostly) female audience in time for “Rabbit Heart,” where girls are raised upon shoulders. Flo was born to be a performer, and when it’s time for “Shake It Out,” she’s ready to deliver. The best moment, though, is at the beginning of “Dog Days Are Over,” when Flo just stands there, knowing that she’s about to make a shitload of people happy. It’s quite a moment, and it’s not something I’ll forget anytime soon.