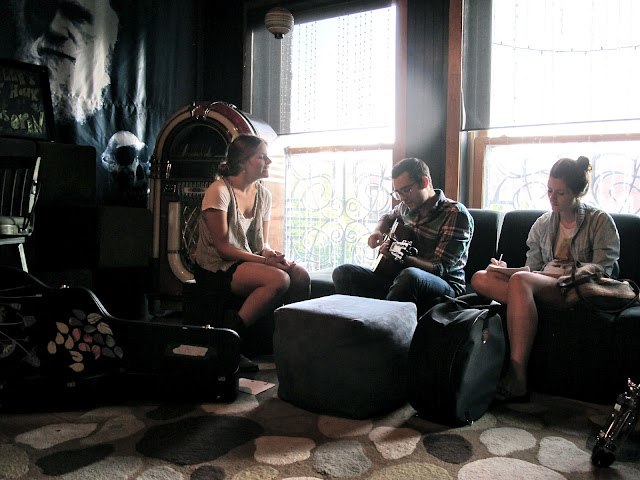 If musical serendipity actually existed – we’d be getting those chills that make the little hairs on the back of our necks stand up right about now, and selling this story to Nicholas Sparks so all the ladies in the world could swoon. Here’s how this lovely Jam of the Day happened.

As a participant in a music sharing network based out of the UK, I was handed a copy of an album by a band named Admiral Fallow, who at the time, was not on my musical radar, but knowing my musical tastes, came highly recommended from a chap living in London at the time. I listened, and was immediately hooked. Seeing that they were playing SXSW in 2011, I emailed them, and asked them to swing by North Cackalacky to play a show for Speakers in Code. They came, blew the roof off, and then quickly headed back to their native land of scotch whiskey, endearing accents and tartans.

Fast forward approximately one year — I receive an email from one Erin Rae, residing in Nashville, that quickly becomes jumbled in a pile of emails. But upon opening this particular email, I see it was not spam from a PR company, but a letter with a story about meeting Louis from Admiral Fallow in Scotland, and being referred to our blog by him.

Now fast forward a few more months, and we’re putting on a show with Admiral Fallow AND Erin Rae and her Meanwhiles, right here in Chapel Hill. It is indeed a small world after all.

Check out our Jam of the Day, “Hard Time Believing” below, it’s just about as beautiful as songs come. Also, we’ll let you know when their debut EP, Crazy Talk, is out. We’ve had a sneak-peek and it’s now officially in heavy rotation at SIC HQ. Also, make sure, if you’re in the Raleigh, Durham and Chapel Hill area, to get your ass out and see them both play October 20th, along with Toronto’s Animal Parts, at Local 506.