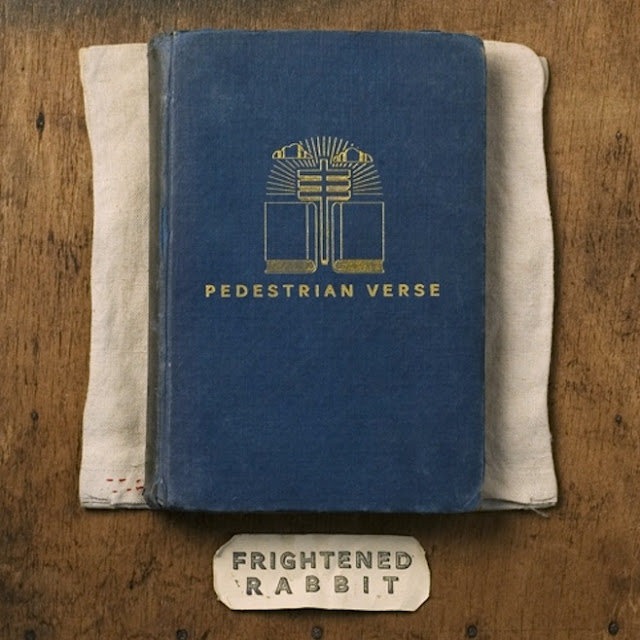 Grudges, I believe, are almost always based out of fear. Perhaps fear of truth, perhaps fear of there being no hope on the horizon. So, we hold on to what we can, creating our own myopic reality inside a world that terrifies us and holds us responsible to always respond. Get busy living, or get busy dying; or, remain hidden in the trenches. Our choice.

Scott Hutchison of Frightened Rabbit is one of my favorite songwriters because of his fine grasp on the beauty of struggle. He creates songs near cliffs, curious to look over the edge, desperate for a undiscovered angle that offers resolve. His words aren’t always magnanimous, but they don’t always point a finger, either. “I am a dickhead in the kitchen,” he sings on “Acts of Man,” which is the opening line of Pedestrian Verse, Frightened Rabbit’s fourth studio album.

This is a guitar-driven album with a furious message of hope. The album’s name is found in a lyric of “State Hospital,” a song involving a woman, “born into a grave,” who is “accustomed to hearing that she could never run far.” It’s an important song about a person desperate to be heard, and its bleakness turns a corner at its conclusion: “All is not lost,” Hutchison sings.

The heartbeat throughout this album pulses with extreme effect. It’s felt on the frantic pace of “Holy” and the thumping of “Late March, Death March.” Ultimately, it ends with its best track, “Oil Slick,” a song that would fit nicely on any great Wilco album. Self-deprecating (“Only an idiot would swim through the shit that I write“) and musically infectious, Hutchison saves his best thought at the end of the song: “Still got hope, so I think we’ll be fine/ In these disastrous times, disastrous times.” Far from any grudge or pedestrian verse.