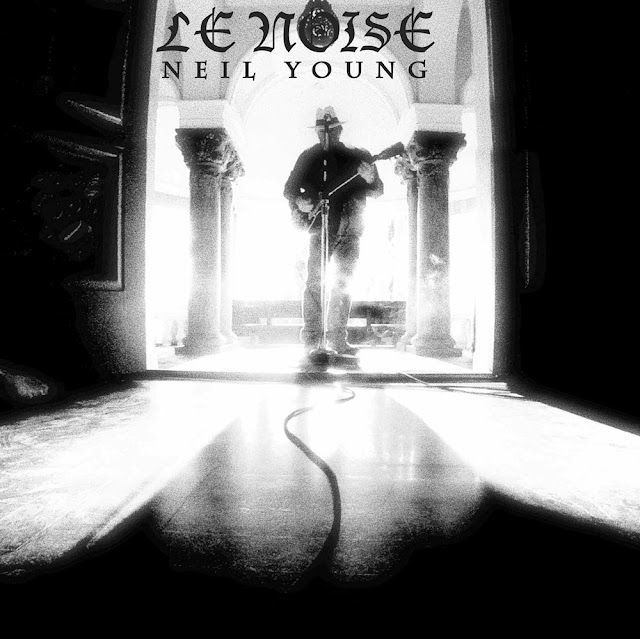 When I hear the words “experiment” and “Neil Young” in the same sentence, my mind drifts ever so slightly. I think of all the times the Canadian artist has challenged my thoughts, my actions, and why I love music in the first place. Experimenting on a Young album might mean that he’s dusted off his vocoder from 1982. It might mean another album about fuel-efficient cars. Or, maybe he’s just written another rock novella like 2003’s Greendale. Whatever it means, it doesn’t always affect me in the ways I want it to, and that’s okay; that’s all part of being a Neil Young fan.

Le Noise, Young’s latest Daniel Lanois-produced album, is a bit of a new experiment for the rock ‘n roll hall of famer. It’s a solo album, with Young performing on an electric guitar and a “multi-layered” acoustic guitar that Lanois presented to Young as having a “new sound.” You can feel this sound on “Love and War” and “Peaceful Valley Boulevard,” two acoustic numbers that have an eerie feel, as if Young is sitting in your living room singing the songs.


The whole album has that kind of direct, personal feel to it, as if Young and Lanois searched for a message, found that message, and bottled it up as fast as they could to keep its spirit in its most holistic form. Le Noise immediately grips you with its opener, “Walk With Me,” which throttles you with an opening power chord capable of damaging your home or car stereo. It might be the best song on the album (it’s easily one of my favorite songs of the year), ending with a few interesting and tasteful sonic tweaks courtesy of Lanois’ unique mastery.

Le Noise is one of Neil Young’s most powerful albums to date, thanks to the raw power of these solo electric performances. While extended solos are absent, the space and overall feel that Young’s electric instrument brings to a song like “Hitchhiker,” which he wrote many years ago, gives the album a much needed breath of fresh air to deliver its overall message: that Young cannot continue on his journey alone.


It’s funny, before I listened to this album, my favorite two solo electric performances that I had witnessed live were given by Kathleen Edwards and Sarah Harmer. Oddly enough, those two artists are also Canadian, and also aren’t afraid to speak their mind in their songs. Maybe it is a Canadian thing – that you can turn up your amp and still allow your voice to be heard, I’m not sure.

Whatever it is, Le Noise is an experiment that I’ll always treasure for the moments that Neil Young and Daniel Lanois captured together, finally, as a team.