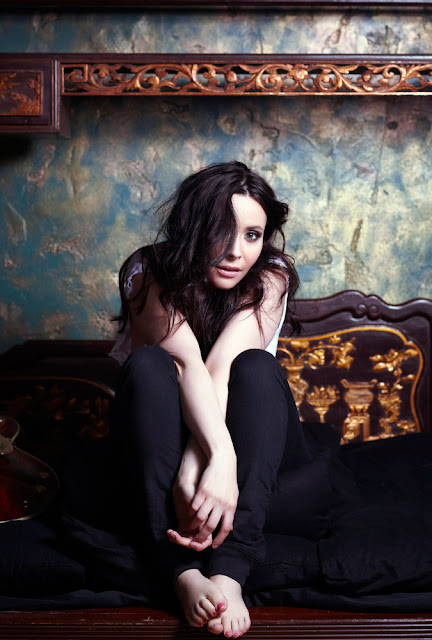 Back in July, we were introduced to singer-songwriter Nerina Pallot, and made her song “This Will Be Our Year” our Pajammy Jam of the Day. And while we’re still fond of that song, that’s not the only gem in the platinum-selling artist’s arsenal. Nope, just have a listen to “Turn Me On Again,” which will, perhaps, turn you on. Again.

Both of those tunes are off Pallot’s latest album, Year of the Wolf, a collection of songs that shows both the soothing and sexy demeanor of the songwriter from Jersey. Recently, we were lucky to catch up with Pallot and ask her questions about her hometown. Enjoy!

Who (besides you!) is the most famous person to hail from your hometown?

SGT JIM BERGERAC. My childhood hero. Every time I’m interviewed and Jersey comes up, Bergerac is mentioned. I really don’t mind – it was such a cool show in a kitsch 1980s way, and it really put the island on the map. I still watch it on Alibi, and it’s like comfort telly. Makes me feel really nostalgic and seeing all the places I know so well on screen makes me a little homesick. Of course, Jim Bergerac is a fictitious character, but that doesn’t matter to me. He really existed as far as I’m concerned, he just got sent to a village in England with an even higher crime rate than Jersey…

How does your hometown or home state influence your music?

I think because Jersey is a tiny island that shuts down during winter, it made me think of things to do to entertain myself. I also lived in the most remote part of the island, so unless I was happy to talk to cows and horses, I had to write songs to keep myself amused. I’m not sure I would have spent so much time on my own, and in my own world, had I grown up in a city where there were loads of things to do. Jersey (along with the other Channel Islands) was also the only part of Great Britain occupied by the Nazis during WWII, and as a result one is constantly reminded about it all over the island. So, I’ve ended up writing a few songs about war over the years. It also lends a melancholy to the island which I don’t really know how to articulate, it’s just something I felt growing up, especially in the winter around the the more isolated parts of the coastline. It’s savagely beautiful, and I think that’s do with the human history as much as its geography.

If you could take me out for a meal in your hometown, where we would we go? What would we eat there?

There’s a restaurant in the south east part of the island called The Old Court House and it is my favourite restaurant in the whole world. It’s classic Jersey food – amazing seafood, simple French bread, a wonderful wine list, all local ingredients, and unpretentious but classic. And classy. With a view over St Aubins harbour, one of the smaller moorings on the island. You would pay three times the amount for the same kind of food in London and you still wouldn’t get the incredible view. I’ve been going there since I was a kid and never fail to visit when I am back on the island.

What is the easiest way to get in trouble in your hometown?

Just look even slightly different from everybody else. Getting your nose pierced is the Jersey equivalent of full-on Cyberdog Goth Garb in the middle of Camden. It’s a conservative place, a little on the preppy side dress-wise if you are a teen/early twenties, so being even slightly alternative made you stand out (and not necessarily in a good way) from the crowd when I was growing up. I am not remotely alternative, but because I had a fondness for incense, more than one ear piercing, once wore patchouli, and owned a couple of Cure albums, I was marked out as weird and potentially ‘druggy’ (when I didn’t even smoke), which I now find completely hilarious. When I came to London I just looked preppy but with a few piercings!!!

Tell us about the first time you played your hometown. How did it go?

It was about six years ago and happened at the last minute. It was a very pop event put on by the local radio station and they flew over a bunch of pop bods from the UK, with people like Rachel Stevens and Mark Owen (before the Take That renaissance) on the bill. Anyway, I was roped in at the last minute and I don’t think my radio plugger even realised I was from Jersey, but I got a mate of mine to meet me at the event with a Jersey T shirt, and rocked up just me and a guitarist. The plane bringing the pop bods over was late, so I ended up playing for an hour instead of two songs, and it was literally one of my favourite gigs. A lot of Jersey people didn’t know who I was at the time, but they were incredibly supportive and since then have always made me feel happy to be home. I’ve gone back to play quite a few gigs since at the venue I loved when I was a child and always dreamt of playing in, so it’s nice to come full circle in the place you started off an adventure from.