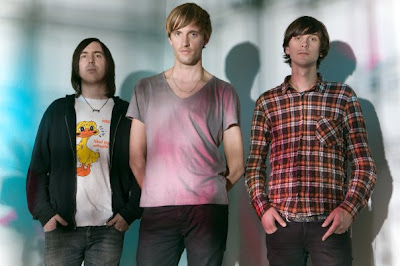 Cut Copy, Australia’s premier dance-synth-rock outfit, has high expectations to meet. Their 2008 sophomore effort, In Ghost Colours, garnered worldwide attention, received near universal critical acclaim, and made fans and concert-goers dance and sweat all over the globe. While the band’s new, as yet untitled, record is not scheduled for release until early 2011, they have rewarded patient fans with a free track to break the fever for more Cut Copy (if you are willing to cough up your e-mail address, which you should).
“Where I’m Going” offers up a slight derivation from most of the material on In Ghost Colours. It is still anthemic, but a little more spacey and a smidgen less dance-y. It is still upbeat and entrancing, but more deliberate and restrained. Despite that apparent restraint from the band’s perspective, from the fan’s viewpoint, “Where I’m Going” is a hand clapper and a crowd chanter… “Yeah, Yeah, Yeah. WOO!” The track evokes faint memories of English greats Oasis, Doves, and the Stone Roses (nothing wrong with that). If “Where I’m Going” is meant to serve as an indicator of tunes that will make up the new record, the 2011 release will be filled with solid tracks that sound a touch methodical and calculated, but can, at the same time, be whipped up by the band as a way to enhance Cut Copy’s already dazzling live show.
Cut Copy – Where I’m Going