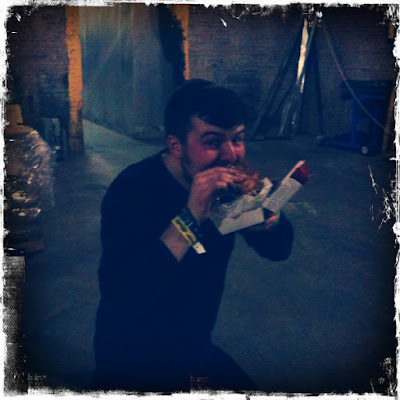 The above, horribly snapped picture, was taken last night as The Rosebuds practiced their new material live before an intimate audience packed neatly into a Civil War era theatre on UNC’s campus. As spring nights are in Chapel Hill, the air that filled the room was warm and electric, as college students in their summer clothes prepped for an evening out. And as The Rosebuds unveiled their new songs, it quickly became apparent that this was literally the perfect setting to do so. Small, seated, quiet, in a room that has seen evenings of firsts since 1851.

What we collectively heard was a surprising, and string-filled, new direction for the band. And as someone who has watched The Rosebuds grow from a college band in Wilmington, North Carolina, to the leaders of the now booming Triangle music scene, it is a mature and very welcomed direction. Things change, scenes change, and most of all people change. The Rosebuds exemplify that.

Our Jam of the Day, “Second Bird of Paradise,” illustrates the change in focus perfectly. Moving from pop driven, sing-a-long-style indie anthems to this – a lush, melodic, downright “Quiet Storm” ready jam that swirls with strings, dialed-back keys, and silky vocals that, for the first time, showcase Ivan Howard’s range.

Download it, and get some Rosebuds news at the same time via the widget below. Pick up the new album, Loud Planes Fly Low, on June 7th right here.