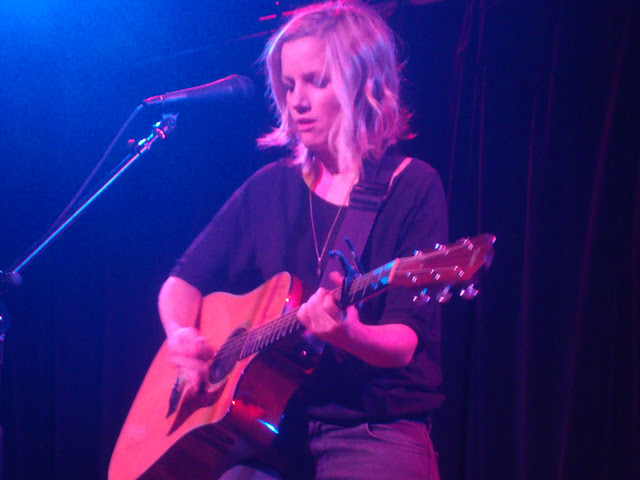 I’m taking up space, I’m right out of place
I’m holding a half-hearted smile to your face
It’s pretty enough, but watch out, it fades away

Sunday night shows can carry a weird vibe. Sometimes, the energy in the crowd or from the artist performing can be lacking, making the occasion seem a little too chill, or perhaps just outright dull. I guess it depends on the show, but a spark is often hard to find with Monday’s ugly head peeking around the corner.

But maybe Katie Herzig has this Sunday night concert thing figured out. Sure, her music can be soft and serious, but there is something mysterious about her — the way she sings, the way she moves, the pensive way she smiles. Her music brings unique energy to the end of a weekend, even if she and her band don’t set out to blow any amps or leave your ears ringing for days.

That is not Katie Herzig.

Herzig is, at the very least, a thoughtful singer-songwriter. Her last album, Apple Tree, won me over with introspective songs like “I Will Follow,” “I Hurt Too,” and “Wish You Well,” and the playfulness of “Forevermore” and “Hologram.” Her voice is sweet, and when she wants to let loose, she can find that extra gear, something she did a few times at The Old Rock House.

She sizzled during the flirty “Hologram,” a song that her young nephew describes as “the one about Katie’s relationship issues,” Herzig explained to us. Its energy was only rivaled by her performance of “Hey Na Na,” a sassy tune that she wrote for the Sex in the City movie, only it never made an appearance in the film (certainly not for its lack of swagger).

Herzig, had some talented help on stage, too. Claire Indie appeared on cello, bringing “Shovel” to new heights, and Jordan Hamlin, besides telling a few jokes, showed off her ukulele, accordion, clarinet, and electric guitar (and probably a few other instruments I am forgetting).

The show concluded with the trio honoring a birthday request (“How The West Was Won”), complete with whistling, and absolutely nailing “Wish You Well,” my favorite Herzig tune. And when I say favorite, I mean that in the most obsessive way — so much that I would have gladly traveled to see Herzig sing it and play it, and then leave. Yes, even on a Sunday night.