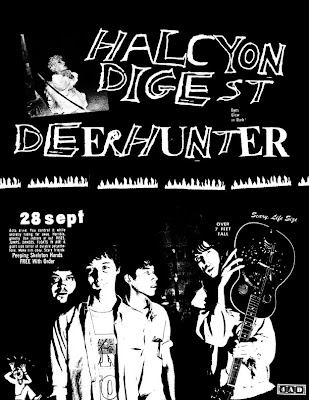 Deerhunter, the ever-evolving and prolific Atlanta quartet, led by charismatic and wildly creative front-man Bradford Cox, has come a long way from 2007’s exceptional, but occasionally impenetrable, psych-space-noise debut LP Cryptograms. With each passing year, Deerhunter’s music becomes more and more accessible, without sacrificing the band’s unshakable originality. With its latest release, Halcyon Digest (released September 28th on 4AD), Cox’s clan injects a perfect amount of pop sensibility into its constantly developing ethereal, aural aesthetic.
One of the several stand out tracks on Halcyon Digest is “Helicopter.” Cox’s voice and lyrics drive the song, but at the same time melt into the composition as if they were just additional instruments in the wild bramble of the track’s atmospherically complex arrangement. As “Helicopter” flutters to an end, we notice Cox’s lyrics more prominently as he repeats beautifully, “Now they are through with me.” While the lyrical content may tilt towards the dark side (touching on religion, rejection, inadequacy, loneliness), the restrained ebullience of the audio architecture nonetheless lifts us to a place of happiness.
Watch the video for “Helicopter” below. Buy Halcyon Digest HERE.