Despite its proximity to the Lone Star State, Austin is not Texas. Culturally, this city sits over the rainbow. Splashes of color fill street corners and locals have a song for anything. Austinites have proven that any place can be a stage if you try hard enough, and they’re not afraid to let you know how they’re feeling.

As Austin City Limits attendees filed into Zilker Park this fall, they probably noticed something different. Maybe it was the cool breezes sweeping through the trees. Maybe it was the spacious layout and easy-going flow. Maybe it was the black-and-white Beto For Senate shirts and the unapologetic “Just Fucking Vote” signs. 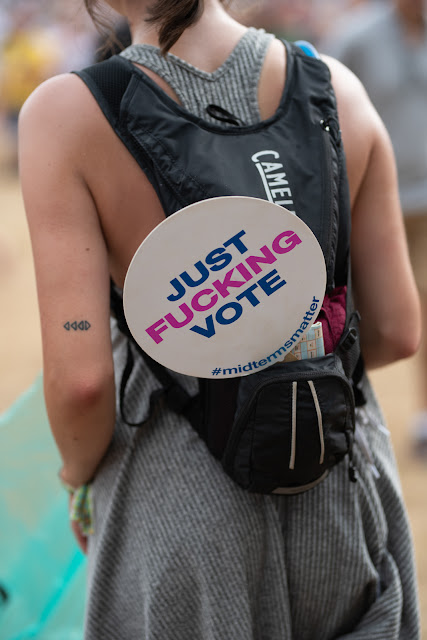 This year’s music festival had an edge to it. And no, it wasn’t just thanks to Metallica’s double bass drum. At almost every set, people heard some sort of political outcry — some more subtle than others.

David Bryne’s cover of Janelle Monae’s “Hell You Talmbout” startled people out of their mundane festival worries. The roaring parade of crashing cymbals and popping snares rang as a call to action. From Trayvon Martin to Sandra Bland, Bryne and his band made sure that we said their names.

Brandi Carlile called on Pearl Jam guitarist Mike McCready to finish the set with The Star-Spangled Banner. As his roaring riffs blared over the field, Carlile faced the drums and kneeled. The cameras made sure to zoom in on the words “Beto For Senate” on the back of her shirt. The image covered the screens.

Chvrches frontwoman Lauren Eve Mayberry spilled a messily eloquent statement during Saturday evening’s performance. The audience wildly cheered as she daintily referred to Ted Cruz as a “cockpopsicle.” Her cathartic monologue seamlessly slid into “Leave a Trace,” proving that, sometimes, you just have to dance it out.

“No matter what we look like… or how we dress, we deserve respect in every room!” You could hardly hear the last syllable of Janelle Monae’s passionate speech over the wave of screams rushing toward the stage. Dozens of artists pleaded with the crowds to vote, but it often faded into the soundtrack like white noise. When Monae said the words, it was like a golden pink ballot box fell to the field. Her words carried weight, and people leaned in to listen.

A sparkling little gem wedged itself onto the second Sunday’s lineup, almost without a sound. Those who knew about it didn’t broadcast it. They crept to the tent early and leisurely secured their spot. While hipsters and Instagram influencers flocked to the headliners to catch some golden social media coverage, a few hundred fans waited to see The Revolution.

The set swirled with purple lights and funky bass lines. The sound was delicately built, layer upon layer. I wanted to dissect their musicianship, to shrink inside the guitars and live there for a while. But this music was made for dancing, and that energy was infectious.

When The Revolution roared into “I Would Die 4 U,” the tent filled with emotion. Sweat flowed into my eyes and quickly blended with my tears. From the outside, this set looked like your average drunken debauchery. But inside the flimsy tent walls, we were joining the revolution.