When it happened, or, rather, when it started to happen, I was stunned.

Neil Young walked out in the darkness, stage right, sat down at his upright piano, and began playing “After the Gold Rush.”

A few days before the tour opener in Milwaukee, a plan was conceived.

Formal rehearsals began a few nights before opening night at the Alpine Valley Resort in Wisconsin. “One night, as the sun was setting, Neil played ‘After the Gold Rush’ on the piano,” says [Micah] Nelson. “I said, ‘Wouldn’t it be great to open the show like that?’ He said, ‘Yeah.’ Then we all just kind of came up with the set list together, though I think Neil had been conceiving it in his mind for quite some time. The basic idea was that we’d progress from acoustic to mellow to heavy and electric, but filling in the blanks was a collaborative effort.” 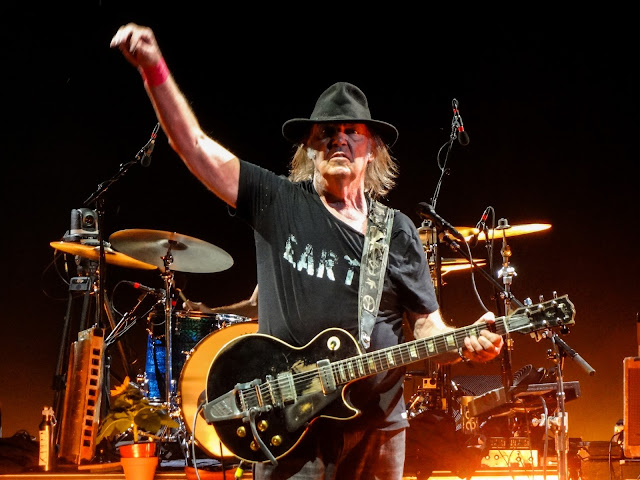 Every show this past summer on the Neil Young + Promise of the Real tour began like that. Neil would continue — acoustic guitar in tow — with the “hits” like “Old Man,” “Long May You Run,” and “Heart of Gold.” It was my 28th Neil Young show, and it was different from the rest.

Young, who turned 70 last month, played 3+ hours with Promise of the Real, a band featuring Lukas Nelson, Corey McCormick, Micah Nelson, Tato Melgar, and Anthony Logerfo. They played songs from The Monsanto Years, but also left room for deeper cuts like “Walk On,” “Words,” “White Line,” “Peace of Mind,” and Don’t Be Denied.”

And then there was “Down By The River,” which was well over 10 minutes, and seemingly arrived from another universe.

Be on my side
I’ll be on your side