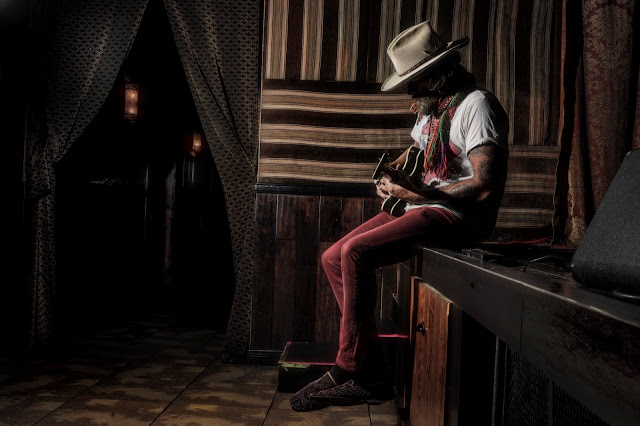 Donavon Frankenreiter has been a busy man. His latest album, The Heart, was released in 2015, and this summer he will embark on a tour that will reach many corners of the world. If you’re not familiar with his latest work, take a few minutes to “California Lights” from The Heart.

Please enjoy our interview with Donavon below.

I read recently that your 12-year-old son, Hendrix, wrote the music for “Little Shack.” How did that happen?

Hendrix was jamming on his guitar one night and my wife was making some dinner when he went into that song. We both stopped what we were doing and I ask him, “hey, whats that song?” He said, “oh just something I been working on.” I dropped what i was doing and he taught it to me and recorded it right away and sent it to Grant Lee Phillips and by the next morning Grant had sent it back with all the lyrics. It was an amazing process that I never experienced before.

Take me through a day in the studio while you recorded The Heart.

We did one song a day live on the Internet. It was streaming 10 hours a day for 10 days straight,
another first for me and I just loved it. I love doing a song a day. It was an amazing studio where we lived for two weeks and that made the recording process one like I never had before.

My favorite song on the album is the closing tune, “California Lights.” Can you tell me what that one means to you?

All the emotions that I went through the night I found out my dad had leukemia…he died one week after the album was finished. So recording that song was one of the toughest things I have ever done in music. It was the most emotional records I ever recorded with everything that was going on. I remember I cried when I left the studio. To face all that was going on with my dad, I kinda escaped all those emotions up until that point through the recording process.

You’re going to be doing a lot of touring this coming summer. What do you look forward to while on the road? What do you struggle with?

I really only look forward to playing. That is the most fun thing about touring, it’s the thing that keeps me touring. It’s what I love the most about it. Two weeks into touring I feel the band hits a point where you are just locked in and it’s an amazing feeling to get to that place. The thing I struggle with while on the road is being away from my family — my wife and two kids. It’s the hardest thing about touring to be away from them !!!!! I struggle with it every time.

Finally, what is your take on streaming services like Spotify? Good? Bad? Somewhere in between?


I think the whole music industry thing and its collapse has been a very rough and terrible thing that has happened. There are no real record stores left and no real radio stations like there were before. Don’t get me wrong — there have been many amazing things that have come from the Internet and all the technology we have now, but it has left every musician in a way different place that he or she was in 12 years ago.

It is almost impossible for new bands to hit the road and sling their new album and make a living selling their music!

The only thing that people aren’t stealing and are still paying for is the live experience of going to a concert. I don’t think they will ever find a way to steal that, or a least I hope not.