There was no Cold War at Plush last night. It wasn’t “hospitalization hot” or “raining from the ceiling,” either, which was how Josh Ritter described his last Saint Louis performance at Off Broadway, a true sauna-like environment where you didn’t have to move an inch to sweat.

No, the only thing raining last night was quality music, including the songs of opener Bhi Bhiman, a Saint Louis native who knows a thing or two on how to write a song. His set started to show life with “Equal In My Tea,” and later with “Ballerina,” when he sang, “We got married in a Walmart, down by the Wrangler jeans.”

As a songwriter, Bhiman doesn’t lack a sense of humor, but he still knows when to draw the line, like on “Crime of Passion” and “Guttersnipe,” the latter being his best song which closed his set, getting a strong reaction from the crowd when Bhiman belted out, “I’m on my way to feeling fine.”

And we were well on our way to feeling more than fine, soon greeted by the smiling Josh Ritter, who came out solo to deliver “Monster Ballads,” a gem from 2006’s Animal Years. Ritter’s band — The Royal City Band — would join him right before the last verse where he sang, “Passing Cairo on a getaway, with every steamboat like a hymn.”

You could argue there is a line in every Ritter song that immediately stops you in your thoughts, making you wonder just how talented and magical the songwriter from Idaho really is (and why we’re still lucky enough to see him in intimate places like Plush). Songs like “Good Man,” “The Bad Actress,” and “Rattling Locks” soon followed, with Ritter literally jumping up and down as he secured a new guitar for each song. And like a controlled mad man behind the microphone, he shouted, “And he’ll act like he forgot you, but the music’s never loud enough,” during “Rumors,” a song from 2007’s The Historical Conquests of Josh Ritter. He even teased a few seconds of Dire Straits’ “Walk of Life” in “Right Moves‘” outro (good move, Josh). 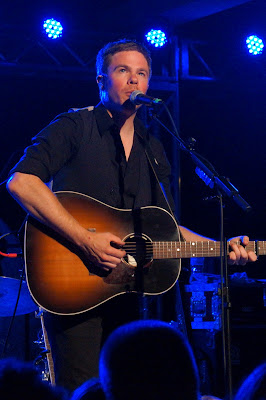 Ritter moved quickly through his catalog — a master of pacing, you might say — someone who has perfected the art of easily keeping an audience’s attention through a two-hour performance. There were no awkward pauses or wasted minutes; later in show, when it looked as if Ritter would have trouble unbuttoning or unsnapping the top of his shirt, he grew tired and just ripped the damn thing apart. Music, it seems, is the only thing that is important to this special artist.

He treated us to a rare “Naked As A Window,” which led into Animal Years’ “Girl In The War,” a song that constantly stands for something new as we pass through time together. “This one’s for all those people…” he said, possibly referring to the recent tragedy in Colorado. “But now talking to God is Laurel begging Hardy for a gun/ I got a girl in the war, man I wonder what it is we done,” he sang.

As he did last year at Off Broadway, Ritter requested that  the lights be entirely shut off for “In The Dark,” which he performed without amplification. This was after he polished off a solo acoustic performance of “You Don’t Make It Easy Babe,” and before a solo “Snow Is Gone,” two songs from 2003’s Hello Starling. There was a new song, too, titled “New Lover,” and it was vintage Ritter. He still smiled while he sang, “I got a new lover now, I hope you got one, too.”

“Harrisburg” featured a bridge of The Beatles’ “Happiness Is A Warm Gun,” and yes, there was a brief slow dance during “Kathleen.” We were given this all from a man who almost died earlier this year because of a freak medical condition called “acute exertional rhabdomyolysis.”

Josh, we’re lucky you’re still with us, smiling and leading the charge. You’re a good man.