“Hello everyone. We’re very excited to be playing for you in North Vagina. That’s funny because it sounds like Carolina…” This was the first thing uttered through a microphone Sunday night as Yuck took the stage. As far as I could tell, there was no laughter.

Sunday night shows are tough. Fans who have lives are already tired from the “restful” weekend, so important things that feed live energy (like attendance, drunkenness, and the present audience’s willingness to actually move its appendages) all play into the final outcome of the show. Luckily, clocking in at just over an hour and a half, this show was built for Sunday nights, and those in attendance were fully engaged and apparently not concerned about the inevitable beep of the alarm clock Monday morning.

Things were positive from the moment I rounded the corner of Franklin Street to find a line out the door, spilling out onto the sidewalk. This show was one of those rare bills that offered two bands who were of equal interest, having received a preview copy of Yuck’s brilliant self-titled Fat Possum debut. The record, having been made by people from all over the world, spans a few sub-genres of indie-rock – all of which I connected with my musical taste immediately. I found myself playing it twice as much as Dye it Blonde, Smith Westerns acclaimed new album that has the blogosphere buzzing. 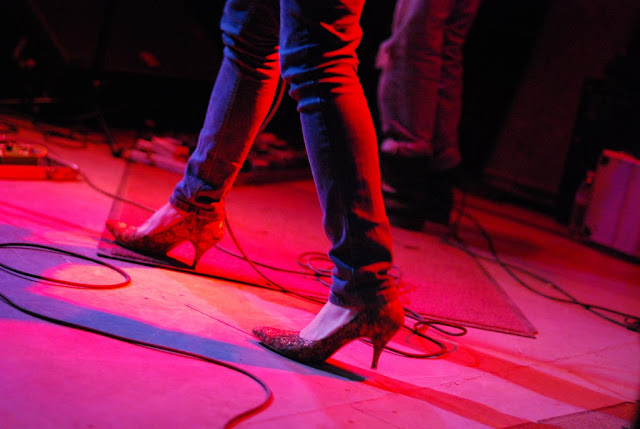 ﻿﻿
Luckily, Yuck is a much, much better band than it is a comedy troupe. This was immediately apparent after hunched frontman Daniel Bloomburg stepped back from his mic stand and launched into the bouncy opener, “Holing Out,” which rides on the rails of the forgotten guitars of mid-nineties bands now buried and gone. “The Wall” was up next, building on already fuzzy guitars by adding electrified riffs that J. Mascis paid forward a decade and a half ago. A perfect song, really, for anyone who cut his teeth on Dinosaur Jr., My Bloody Valentine, or Kim Deal’s basslines for the Pixies. Superdrag. Hüsker Dü. Pavement. All present in spirit.

The focus changed with “Georgia,” and its female/male vocal combo that presents Yuck at its melodic best, slowing it down and setting up “Suicide Policeman,” a song that I can only describe as Beulah-ish. The spotlight had shifted to sunny guitars, gentle drums, and soft singing, demonstrating versatility as a band and as songwriters, possibly showcasing the members’ varied backgrounds and musical tastes. After a quick new song whose title was something about a milkshake, from what I could tell, they picked things back up with the Speakers in Code Jam of the Day “Coconut Bible,” a b-side track that’s mere existence, or lack thereof on the final album, illustrates how strong this album truly is.

Building on the distortion left over from the previous song, Yuck tied up its thirty minute set with the downtrodden and frizzy album closer, “Rubber,” which layers feedback and screaming guitars over sparse lyrics and clanging cymbals. The perfect song to end a quick and aggressive set on a positive note, tying things up nicely by closing without punctuation.

Smith Westerns opened things up with “Still New,” the first song on Dye it Blonde and an intermediary showcase of how the guys have grown their musicianship since their debut LP. And as a band comprised of members that are not yet old enough to drink, they have grown far beyond their collective years musically, refining their previously choppy sound into a sophisticated jaunt into classic rock territory. Illustrating that the low-fi days are well behind them, “Only One” translated well live, swirling vocals and keys becoming the building blocks to the proto-punk guitars reminiscent of wall-breaking rock in the late ’60s. But speaking too soon, the band reached back to its first album for somewhat updated versions of “Be My Girl” and “Tonight.” Both worked very well despite a few sound issues that haunted Smith Westerns throughout the evening.
﻿
The rest of the evening was spent looking forward. Seemingly, once band leader Cullen Omori’s hair was wet enough to brush out of his face for good, the band was able to move around a bit and settle into a place that let it truly shine. “End of the Night” was next, and once these songs are more known, this will be a song that is sung to the band just as much as it sings it to the audience.

This was followed by “All Die Young,” the crowning achievement from a songwriting standpoint thus far, in a career still in its infancy. An epic song of sorts, ghosting The Beach Boys’ harmonies and The Band’s melodic hooks. It is truly amazing given the early experience of those who penned it. And it shined live, serving as the pinnacle of the night and signaling the slow descent to the evening’s end.

The last moments of an encore-less evening were the most amazing, though. LP title track “Dye the World” translated amazingly as show-ender, as all the audio tweaking seemingly paid off to deliver the four-minute plus song in all of its screaming-guitar glory. And standing there, listening to a band whose median age is ten years younger than my age, playing songs that feel as if they are ten years older than me, I realized that music is increasingly hard to define and categorize. Really, all that matters is that we enjoy what we experience. Nice job, guys.