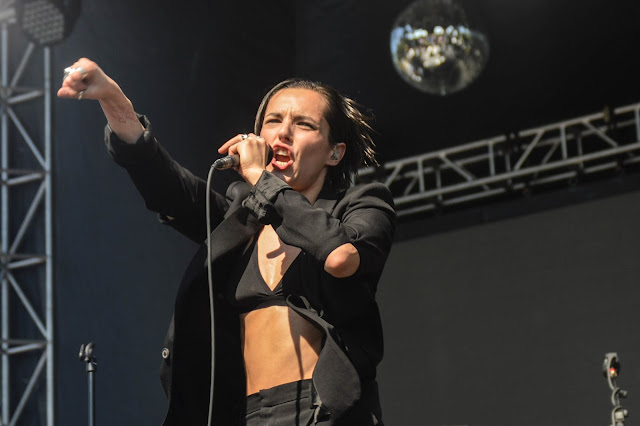 I trekked to Chicago last weekend to attend the Pitchfork Music Fest for the first time ever. Knowing that I’m simply not as quick and nimble as I once was, coupled with the fact that my “bounce back capabilities” aren’t completely intact, I only bought tickets for Sunday’s line-up (what I deemed the best and brightest day of the three-day fest in Union Park, anyway). I have to say, despite the heat, the throngs of too-cool-for-school hipsters, and Heineken as the only boozing option, losing my Pitchfork virginity was quite special.

My day started with the Los Angeles trio, Best Coast (playing The Gargoyle in Saint Louis with Male Bonding on 9/14, FYI). Lead singer Bethany Cosentino’s voice sounded pristinely sleepy and hazy, and her turquoise guitar made me drool. I can’t say that pre-Pitchfork I had delved too deeply into the band’s (thus far) limited catalog, but after seeing them live, I will immediately grab the debut LP, Crazy For You (out July 27th on Mexican Summer).

Next, I headed over to see Girls on a bigger stage. The lead singer, Christopher Owens, rocked a Lyle Lovett haircut, and he was successfully wearing a colorful blouse. The San Francisco band sounded pretty good, but I’m just not a huge fan. I could bore you by conjuring up other specifics to report, but you should get those from an authentic Girls lover. That, I am not. So, I will end on a high note and repeat the fact that Christopher Owens successfully wore a colorful blouse. 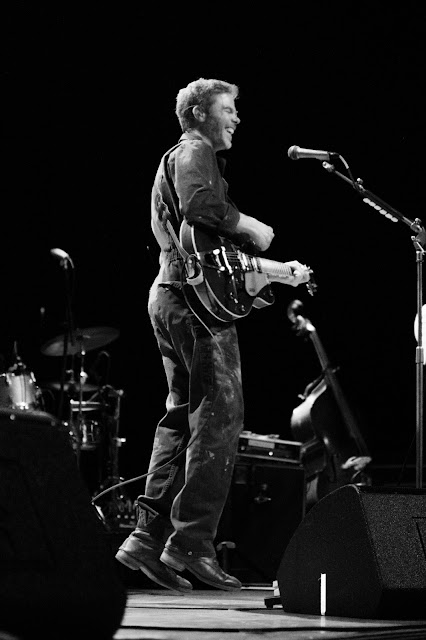 I left Girls behind a tad early so I could grab some prime real estate for the Beach House set. Like the rest of America, I am in love with the Baltimore duo’s early 2010 release, Teen Dream, so of course, I was psyched to see the band live. The music is moody and mellow, so the most movement they got out of their very amply-sized crowd was a rhythmic sea of head-bobbing (I even saw a mom with a American flag fanny pack and New Balance cross trainers completely engrossed in the shoegaze sway), but at least the onstage banter between lead singer/keyboardist Victoria Legrand and guitarist Alex Scally was humorous (they are happy to be back in the States because the coffee is better here, and certain songs are guaranteed to eliminate, ahem, underwear dryness). Album fave, “Norway” was faithfully hypnotic, and “Used To Be” was simply gorgeous. The set kicked off with “Better Times.” Two enthusiastic thumbs up.

So, honestly, the biggest draw for me on Sunday’s line-up was the much-buzzed about, Local Natives. I had to leave the fabulous Beach House set about halfway through to catch the start of the California five-piece’s show. (Don’t judge me; this is totally justifiable, given that Beach House is playing Saint Louis on 10/2). I’m glad I caught the beginning because the second song Local Natives played, “World News” is my favorite off the new album, Gorilla Manor.

It is absolutely no surprise that what really sets these guys apart from other like-minded indie rock bands is their crystal clear, multi-layered harmonies, and they certainly do not lose any of their luster when performed live. As a bonus to the perfection of Local Natives’ sound, the band threw a total party at Pitchfork. The crowd was lively and festive, dancing to the afro-pop percussion of “Sun Hands” and “Shape Shifter.” 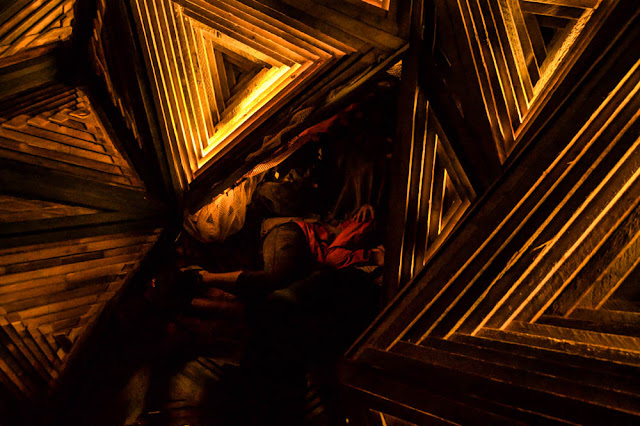 If Local Natives hosted the party, the stage’s next band up, Surfer Blood, threw the after party. I knew the guys from West Palm Beach were youngins’, but man, they looked like babies onstage. They started their set with “Fast Jabroni.”

I definitely can’t say that Surfer Blood sounded as sonically accomplished as the aforementioned Beach House and Local Natives, but for what they lacked in polish, they made up wholeheartedly in unabashed fun. The sun was beating down on the crowd for the majority of the set while sprays of water from the fest’s volunteer “squirters” refreshed it. Most dudes were shirtless and filled with enough Heineken at that point to let loose with their unique brand of dude-dancing. (From the get-go, my friend Darren commented on the audience’s noticeably masculine flair, dubbing Surfer Blood the pioneers of “dude rock”). They finished out the set with Astro Coast standouts, “Take It Easy” and “Swim.”

Next up, St. Vincent. At this point of the day, my knees were aching, and my legs were tired. (Like I said before, I’m not the sprite gal I used to be). It was nice to chill out on the lawn to Miss Annie Clark, but I have to admit that most of what I heard of her set was forgettable. It was abstractly ambient, but also kind of Enya-like. Not my cup of tea, but I still give her major props for last year’s cover of Crooked Fingers’ “Sleep All Summer” with The National. I was also surprised to see her jamming hardcore on the guitar, and I’m always up for some raging girl power.

The National and St. Vincent – “Sleep All Summer”

After getting a second wind, it was time for Neon Indian. I was very curious to see this live show, knowing that much of the instrumentation is Alan Palamo’s manufactured creations. This is the epitome of divisive music; either you love it, or you hate it. Either you get it, or you don’t. Personally, I can’t imagine driving to work with Psychic Chasms in my CD player, but I can definitely see myself listening to Psychic Chasms by the pool, half in the bag. It might not be for everyday use, but I get the point.

When I made “Terminally Chill” the Jam of the Day back at the beginning of the year, I wrote that I could see this song soundtracking the famous red bikini scene in Fast Times at Ridgemont High. After seeing Neon Indian live, my friend Courtney and I both realized there was also some deep semblance to Paul McCartney’s “Simply Having a Wonderful Christmastime.” No offense, Alan.

I next made my way over to the big stage once again to catch the beginning of Big Boi’s set. The sun was setting, and there was a beautiful light cast on the entire scene. When I surveyed the landscape, it was clear that everyone in attendance was happy. It was the perfect set up for Big Boi to take the stage. I honestly don’t know why it didn’t dawn on me that he’d be dipping way back into Outkast’s early catalog, but when “ATLiens” was played right off the bat, I almost died. This was the point of the day where all the hipster facades melted away, and people just genuinely got down with their bad selves. And grown men dressed as dogs began mingling with the already entertained crowd. 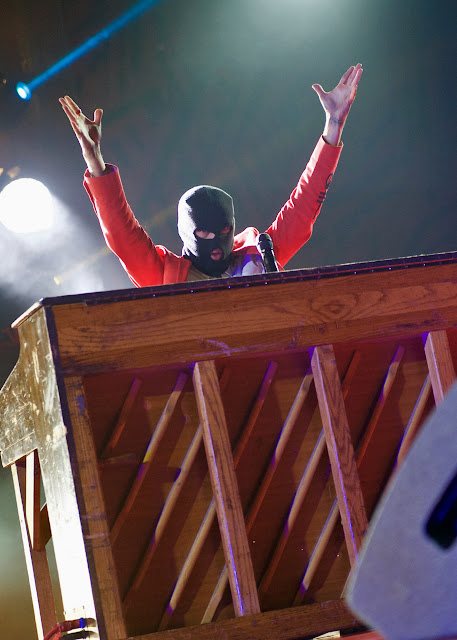 I was sort of sad when we had to leave Big Boi to catch Sleigh Bells on the smaller stage (which made no sense to me since Sleigh Bells are so freaking hyped right now). The crowd was huge. The music was loud. I even made the comment that I was trying to mentally prepare myself for the volume before the set started, and I was still shocked by the noise level from the onset. Seriously, I had heart palpitations. That made not a lick of difference to most of the crowd. There was serious dancing happening. There was even crowd surfing.

But, honestly, Sleigh Bells didn’t sound so hot. I feel like I’m sinning against the Ten Commandments of Hipsterdom just typing that. I don’t know if it’s hard to translate the music from the album to a live show, but it seemed imbalanced, too fuzzed out, more like noise than noise rock. I don’t think these are the comments of an audience member with a prudish ear; I think the Brooklyn duo had some issues on Sunday night. But the bottom line is that no one really cared.

Sleigh Bells – “Crown on the Ground”

So, here is where you’re really going to judge me. We left before Pavement. I’ve never been into Pavement, not one note of one song. After seven hours of live music, claustrophobic crowds, warm beer, and consistent sweating, I wanted a bar with a functioning A/C. It’s just a given that you will need to brave these particular elements when you’re at Pitchfork, or any summer music fest, for that matter. In the end, if you psych yourself up properly and know what to expect, it’s a blast. So, three cheers to day three of the 2010 Pitchfork Music Festival. Until we meet again…