Our very own Jason chatted with Scott Hutchison, of Frightened Rabbit, about the band’s new record, as well as girls, a few weeks back. If you missed it, feel free to check that out here! But when Scott and his brother (and Frightened Rabbit drummer) Grant were in Carrboro, North Carolina this week for their sold-out show at the Cat’s Cradle, I had the chance to take some portraits of them together, and ask some questions about what it’s like to play in your older brother’s band, who they fight most with, and who their mum loves best (hint: it’s neither of them). These shots and this interview are the first in a revived photo series I’m working on of portraits featuring siblings who play in bands together. I hope we’ll have more to share with you soon!

SiC: What compels someone to play with their sibling?

SiC: So did you guys play together — you’re a drummer, right, Grant? — have you played together all your lives?

Grant: I’m the drummer. No. Not really, no. We played together a couple of times earlier in school, but being in high school and having your little brother in your band, it’s not necessarily that cool.

Scott: I am. So it wasn’t cool, and he wasn’t in the band when I was in high school.

Grant: We had separate bands.

Scott: It must have been pretty terrible in the house, our mum and dad would put up with hearing us play separate songs all the time.

SiC: Did they go to separate gigs? Did they come out to see you?

Scott: Not while we were in high school.

Grant: We played for our friends, people of a similar type … but they do now!

SiC: Is it just the two of you?

Scott: We have an elder brother. I’m a classic middle.

SiC: Banging on the drums.

Grant: Being the loudest, yeah. Grabbing the most attention. Trying to. We’ve got an older brother …

SiC: I’d say for you guys now this is a proper job.

Scott: Only very recently, though. We had a long time of taking time off from crappy jobs to go on tour. Now it’s definitely … we’re professionals.

SiC: How did you come back to playing together?

Scott: Well, Grant moved to Glasgow, and I was just getting started playing shows on my own as Frightened Rabbit and I didn’t know any other drummers. I mean, he’s a good one, but it was just like, it seemed to make sense. It just seemed natural. 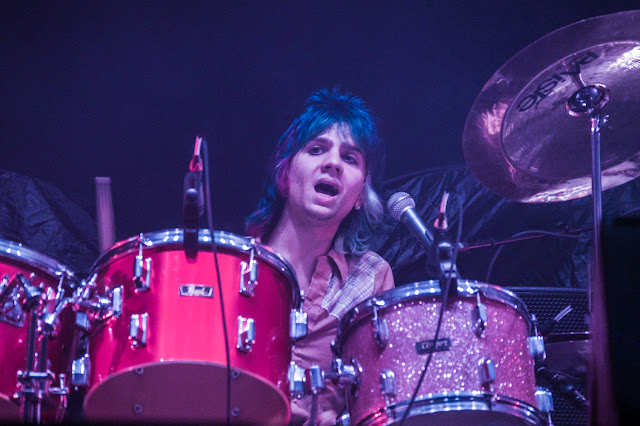 SiC: How do the other guys feel? Do you two gang up [on the rest of the band] or are you always on separate sides?

Scott: I would say always on separate sides.

Grant: Not always. We agree on some things. But generally we’re the ones who fight. Never really had a falling out, though. It’s quite a good release valve, in a way. It’s okay to be a bit of a dick to him. He doesn’t have a choice, and I’ve been doing it to him for a long time. It’s a positive thing, whenever we do have a bit of a tiff. It’s never come to blows. It’s generally just a drunken argument. The next day, it’s very rare that we even need to apologize.

SiC: You guys think it’s a good thing. You like playing together.

Scott: I think some people seem to be aware that we’re best connected, especially with this album that we recorded as a band. We don’t spend a lot of time together when we’re not on tour.

Grant: Scott lives in Edinburgh, I live in Glasgow, I don’t feel like I miss him.

SiC: I want you to tell me, totally honestly, who’s Mom love best?

Grant: He’s provided grandchildren, so that’s very important. We could probably say, [her grandchildren]. Since the first niece came along, she doesn’t care what we’re up to anymore. ‘Mum, we sold out Terminal 5!’ ‘Oh, really, that’s nice, [their niece] said a new word!’

Frightened Rabbit still have a handful of tour dates in the US in support of Pedestrian Verse before heading to Australia with Speakers In Code favorites Admiral Fallow; you can catch tour dates here.