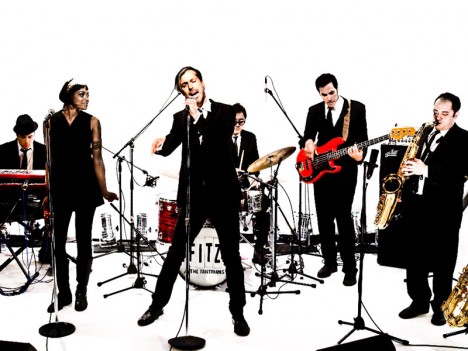 Damn The T.A.M.I. Show. That’s right – I said it. I have some serious animosity toward that insanely awesome 1964 concert film starring James Brown, The Supremes, The Beach Boys, and pretty much every other major act of that era. It has apparently created a void in me, and for the past two weeks, I’ve been in search of new music that satisfies my urge to duck tail my hair and do the jerk like a madman.


My quest completely paid off a few days ago when I found Fitz &The Tantrums and their self-proclaimed brand of soul influenced indie-pop. Its modern day blue-eyed soul. Think Motown or Stax Records songs but written and performed by a group of hipsters living in southern California.

Their debut EP Songs for a Break Up Volume 1 is out now and as the title suggests, these aren’t songs about love – or at least not the sunny side of it. It’s breakup music, led by “Winds of Change,” which hearkens back to a young Tom Jones – but this time he’s taking the lead for the Ike & Tina Revue. It’s the perfect combo of soul and funk topped off by some angry lyrics about a relationship gone wrong.

In other words, it’s the perfect thing to fill my ’60s era void. At least until their debut drops later this year.

Click below for a free three song mp3 bundle recorded live on KCRW, which includes “Winds of Change”, “We Don’t Need Love Songs”, and “Don’t Gotta Work It Out.”