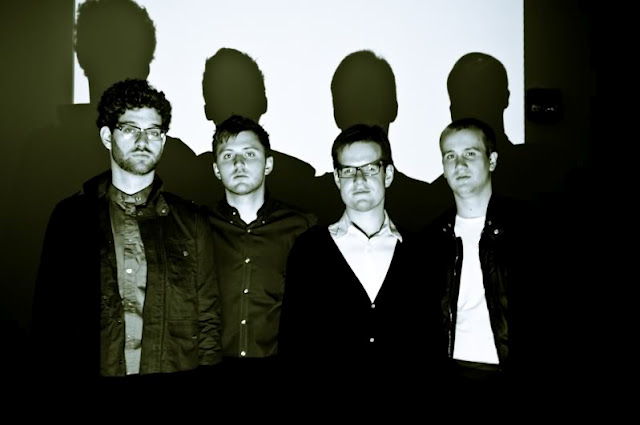 Chicago’s California Wives (nope, not actually from California) has been on our radar since the band played this year’s PLAY:stl fest back in September. They wowed us with the first single, “Blood Red Youth,” off the debut, five-song EP, Affair. The band’s dreamy pop landscapes landed the track on our 100 Best Songs of 2010 list, and now our love affair with Affair has taken the next big step: a 10 to Spin. The guys got together to craft a playlist, chock full of the ’80s influences that marks their sound, to help them survive the brutal Chicago winter. With a low of -1 in Saint Louis tonight, we’re gonna need it, too.

California Wives is coming to The Firebird with Art Majors and Santah on January 30th. Doors at 7:30, the show starts at 8:30. Get your tickets here.

10 Songs Helping Us Get Through the Chicago Winter
People have good reason to believe that we’re a band from California. Choosing a band name such as ours pretty much set us up for the name clarification game. But what people should probably know is that we spend most of the upcoming months trying to keep warm in Chicago, hidden away from our incessant snowdrifts. It’s not such a bad thing really…it allows us to write new material and work on getting songs ready for the studio. This winter, we will be recording new songs to release for the thaw in March. So, we’ve picked ten songs that are currently in our rotation and influencing us to look in new, interesting directions.

It’s true, New Order is the original reason we came together as a band. And, although we don’t spend every waking hour looking for New Order bootlegs or YouTube videos, they always seem to be an easy choice when clicking through the iPod collection. This song has such a great intro and although the song changes focus at fifty-five seconds, it’s not a let down by any means.

2 Talking Heads – “This Must Be The Place (Naïve Melody)”

Yes, yes…obvious choice. But, we’re being honest here, and this song really takes you somewhere by the time you hit the four-minute mark. David Byrne’s ability to write compelling vocals on repeating rhythm and synth lines is simply amazing. He does it time and time again and no better is this talent on display than on this song.

I feel like the vocal lines on this song are so well crafted and well placed. Listening to something like this, you can definitely tell that these guys take the time to pour over every detail of a song. Every sound is fitting, and it should encourage every band to take a closer look at how their songs are put together.

Definitely my favorite band of the last few years. I could probably fill the entire playlist with their songs, but I decided to go with a song that shows exactly how great they are at crafting great pop songs. This song moves forward effortlessly, and I’m never questioning their decision making as I listen to this one. And I go on and on about great vocal lines, but we’ve got another one here.

Coming from Chicago, we definitely look up to these guys. The impact of the group starts with the amazing rhythm section (John McEntire), but Sam Prekop also props up the band with some great melodies. This song in particular raises our spirits in the dead of winter, but I guess I could say that about most Sea and Cake songs. It was also the first Sea and Cake song I heard many years ago…hello, nostalgia.

We opened for this guy in Saint Louis, and I watched him take over an entire room with a single guitar. The way his voice echoed through the room was haunting, and I bought the EP from him immediately after the show. I specifically remember hearing this song, and the recording didn’t let me down. Sure, it’s not the most uplifting song for the winter months, but sometimes we need to soothe our sorrows, right?

Shoegaze meets pop music. These guys played a reunion show at Lincoln Hall not too long ago, and although all of Whirlpool is great, we’d be lying if we weren’t tapping our toes impatiently to hear this song. Unfortunately, their computer broke halfway through the song, and they had to stop. But, they waited on stage for another five minutes during the encore to make sure they properly finished the tune. It was that important.

8 The Stone Roses – “Elephant Stone” (not the short version)

Let me start by saying that one part of this song in particular forces me to play this on repeat. At 1:33 on my version of “Elephant Stone,” the guitar comes in with this very rhythmic, picking line that pretty much embodies everything I strive for when writing guitar lines for California Wives. And the phrase that immediately precedes this guitar line probably helps it to be as successful as it is. It’s also my favorite Stone Roses song, and it just had to be added to the list.

9 Plastic Bertrand – “Ça Plane Pour Moi” [listen]
I wish I spoke French, so I could really understand everything he’s saying here. Nevertheless, this song is great, and I can sing along with the one melody line that needs to be sung aloud: “Oooo ooo ooo!” Sonic Youth also did their own version of this song.

Okay, I caved. I couldn’t resist putting another Radio Dept. song on the list. This song displays amazing chemistry between the main synth line and the rest of the instruments playing here. This song has some amazing pop sounds and really grabs your attention. If you don’t have this record, go buy it now.

That’s it, ten songs! Hope you enjoy these tunes, stay warm, and we will see you soon!