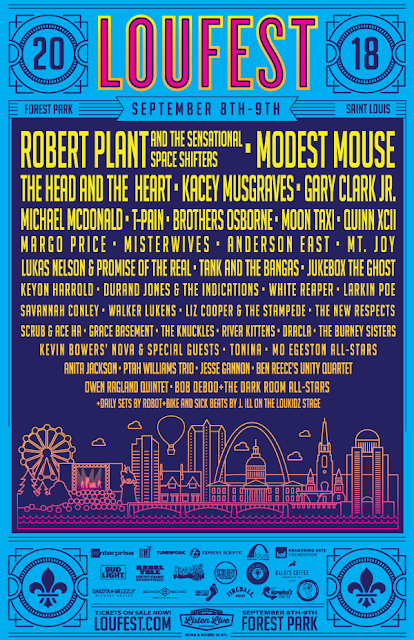 LouFest is back for its ninth year in Forest Park, and the lineup, revealed today, is their best one yet.

Rock ‘n’ Roll Hall of Famer and living legend Robert Plant, who will perform with the Sensational Space Shifters, will headline the two-day festival in St. Louis on September 8th and 9th. Tickets will be available here.

Plant’s booking proved to be an unreal opportunity for LouFest organizers, one they could not pass up.

“It’s a once in a life time opportunity to book Robert Plant,” says LouFest and Listen Live Entertainment partner Rich Toma. “We had the chance to bring a generational talent to Forest Park, and we got it done.”

Plant, who released Carry Fire last year, will likely play a set of solo material and plenty of Led Zeppelin songs. “Going to California,” “Babe I’m Gonna Leave You,” “Whole Lotta Love,” “What Is and What Should Never Be,” “The Lemon Song,” and “Four Sticks” are a few Zeppelin songs that have made it into recent set lists.

While his superstar name carries the weight as the clear headliner of the festival, the lineup is not top-heavy like many other festivals in the United States. This year’s card is incredibly deep, including powerhouse bands like Modest Mouse and The Head and the Heart. Those two, notably, were booked because of feedback given by LouFest fans, who were asked last year who they would like to see in 2018. And LouFest organizers listened.

“That’s why we send out the survey after each LouFest,” Toma said. “We want to hear what bands people want to see. Your voice really makes a difference every year.”

Another huge booking is Kacey Musgraves, who earlier this year made her debut performance on Saturday Night Live. Her latest album, Golden Hour, has been lauded by music critics, and it features songs like “Space Cowboy,” “Slow Burn,” “High Horse,” and “Butterflies.” Oh, and Elton John is a huge fan. Musgraves is currently on tour with Harry Styles, and last headlined a show in St. Louis at The Pageant in 2015.

Here are a few other artists we’re really excited to see at this year’s LouFest:

One of the best guitarists I’ve ever seen live, Austin’s Clark Jr is often described as a blues musician, but he also leans toward rock, soul, and funk. A must-see set.


A rising singer and songwriter out of Nashville, Price recently sold-out the Ready Room in St. Louis, and released the critically lauded All American Made last year. Her set at Farm Aid last year was one of my favorites.

Lukas Nelson & Promise of the Real


While gaining worldwide notoriety as Neil Young’s “other” band not named Crazy Horse, Lukas Nelson & Promise of the Real released a beautiful self-titled album last year, and will no doubt shine during their LouFest set. They are one of my favorite live acts going right now.

And, of course, bands/artists like Grace Basement, River Kittens, Anita Jackson, Scrub & Ace Ha, and The Knuckles fill out the lineup with local talent, which has always been an integral part of each LouFest. Year after year, we’ve seen St. Louis artists like Tef Poe, John Henry, Sleepy Kitty, Beth Bombara, and Illphonics measure up against some of the most popular national touring acts. This year will be no different.

Finally, I think it’s important to point out, with all the festival failure and turnover that happens across the U.S., that even if this isn’t your dream lineup, it’s wise to take a deep breath and appreciate the hard work that LouFest organizers have put in over the years. St. Louis is lucky that LouFest is still here, and in my opinion, this year’s lineup shows that they care about their fans. They listened to feedback from their fans, and maybe most important of all, their lineup does not look like every other festival lineup.

I realize we all have different tastes, and that there are thousands of deserving talents who are long overdue to get their shot on a bigger stage, but I’ve been to some of the biggest festivals in the world, and bigger does not always mean better. Appreciate what we have in LouFest, because as fast as the festival circuit changes, it could be gone in a split J.R. Smith second.

For more information on LouFest, please visit their website.