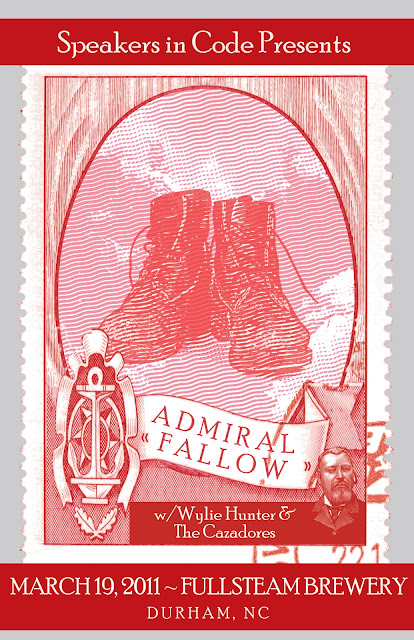 Buzzing Scottish band Admiral Fallow just took a huge leap of faith. They have agreed to make their second show in the United States (ever!) the first show (ever!) promoted by our little music blog! The show goes down in Durham at Fullsteam Brewery on March 19th as the band stops in the Triangle after SXSW on the way to NYC before heading back home.

The band is already causing quite a stir in the land of the Scots. Fueled by young, foot-stomping and faintly maniacal singer-songwriter, Louis Abbott, the band is already known in the UK for its thrilling and cathartic live sets. These shows walk the delicate line between simple voice and guitar compositions like “Four Bulbs,” and riotous cacophonies of white noise. The songs are about alienation within relationships, and experiences of youth itself are sung, chanted, and screamed with utter abandon.

Picked to open for a thirteen-date stretch of Frightened Rabbit’s late 2010 European tour, they are now poised for the March 28th release of the debut album, Boots Met My Face. It’s lead by the first single “Squealing Pigs,” which is a shining example of the band’s soul, as Abbott quite successfully allows his accent to be the focus of his singing, contrasting magically with the sweet sounds of co-vocalist, Sarah Hayes. When the song breaks, a softly-plucked banjo is overtaken by heavily strummed guitars, screaming clarinets, and a chorus of voices that combine for a joyous and heart-filled ruckus.

Abbott says, “All of the songs document the first chapter of my life, be it memories from school or kicking a ball about with my childhood chums. All of the songs are taken from real life events. There’s no fiction. I’m not into making up stories or characters for the sake of trying to stir emotions. They are songs about friends and family as well as a fair bit of self-evaluation.”

Live Reviews:
“…could just be the start of something massive…” The Fly

“[Their] brooding, heartfelt folk leanings are bolstered by a soundtrack of colourful orchestration, including flute, strings and double bass – a rich concoction that has caught the attention of more than a few unsuspecting ears.” The List

“…intimate and epic…quite stunning…” **** The Herald
“They did not so much ‘take to the stage’ as colonise it and build a mini empire of sound for the awestruck concert goers…surely one of the truest new talents in Scotland today.” **** New Found Sound

“Admiral Fallow are set to soundtrack our forthcoming festivals.” **** The List
“…open-hearted love songs and impressively conjuring a balance of nostalgia…” Scotsman

For more information on Admiral Fallow, photos, and interviews check out:
www.sonicbids.com/admiralfallow
www.admiralfallow.com