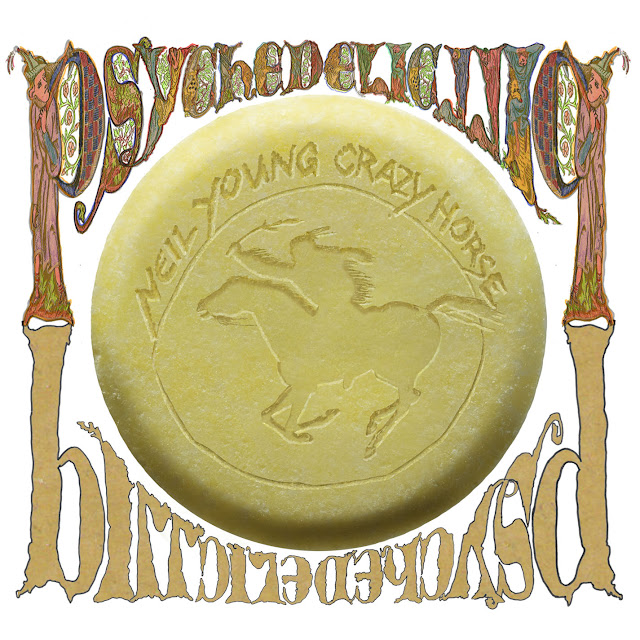 Walkin’ with the devil on a twisted road
Listenin’ to the Dead on the radio
That old-time music used to soothe my soul
If I ever get home, I’m gonna let the good times roll

It’s been a big year for Neil Young & Crazy Horse, with the release of Americana in June, which featured no original material, and now the double-disc Psychedelic Pill, an album comprised of eight originals, two of which exceed fifteen minutes, and the opener, “Driftin’ Back,” which exceeds twenty-five. All for a band who hadn’t released an album since 2003’s Greendale, which was a concept album about Sun Green and the Green family — songs that Young took on the road in a “rock opera” setting.

My advice to you is this before hitting “play”: take a deep breath, and hold on to the great moments, of which there are plenty. This is a raw rock ‘n’ roll album, full of jams, feedback, and rough glory. Its greatest song, “Walk Like A Giant,” is everything that a Neil Young and Crazy Horse song should be: passionate and thunderous, ending in storm of noise that could outlast any tornado siren. It’s the best Young has sounded since “No Hidden Path,” and if you close your eyes in the middle of its unfolding, you’ll hear a few nods to “Hey Hey, My My.”

A close second to “Walk Like A Giant” is “Ramada Inn,” a song about a lengthy marriage, and what happens when the kids leave the nest. It’s also presumably about Young’s new journey with sobriety: “He just pours himself another tall one/ Closes his eyes and says, “That’s enough.” Musically, it reminds me mostly of Broken Arrow’s “Slip Away,” a song that is appreciated only in its entirety: that is, you can’t give up on it after just a few minutes — let it slowly burn.

“Born in Ontario,” “Twisted Road,” and “Psychedelic Pill” are the glue of the album, and I only say that because after a few long jams, it’s nice to hear a song under four minutes every now and then. And these aren’t throwaways — “Twisted Road” has remained in my head for a couple weeks — although the title track does sound like a copy between Le Noise’s “Sign of Love” and Buffalo Springfield’s “Mr. Soul.” But, that’s mostly splitting hairs.

For those of you who weren’t fully satisfied by Americana, you won’t be disappointed here. This is the Neil Young & Crazy Horse you remember, slowly burning, never fading away.